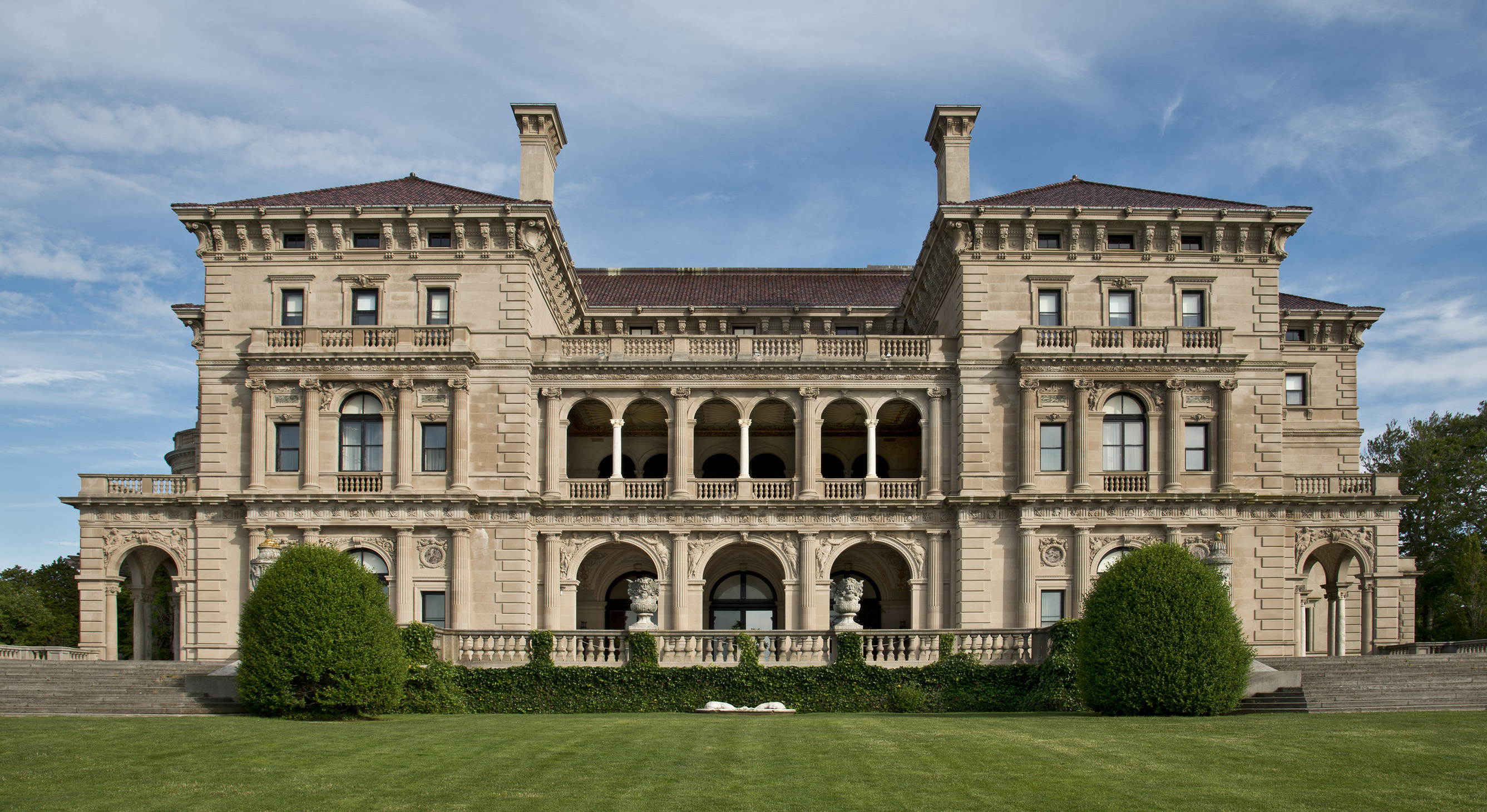 How does the ancient Classical language of architecture intersect with new technology in expressions of American aspiration?

Following the Civil War and Reconstruction, the North emerged with industrial might through the work of individuals like Carnegie and Vanderbilt and others who were responsible for the rapid expansion of the steel industry, trans-continental railroads, shipping enterprises, and other generators of vast wealth for the elite running America's quickly growing businesses and industries. Sometimes called "robber barons" for their rapid increase of wealth at the expense of low-paid workers (and the environment), they were also sometimes the great patrons of public institutions like libraries, museums, and theatres. This dual definition, based largely on shifting interpretations based in personal values, gives rise to the decades around the turn of the century, and a class of architecture in the United States that drew directly from overt historical precedents, as either the Gilded Age, the American Renaissance, or both.

In architectural history, the term "Gilded Age" largely focuses on residences, and can be seen as a parallel to, or subset of, the broader goals of the "American Renaissance," which has aims that are more public in nature.  These terms can be used interchangeably, but do carry slightly different connotations, so the way they are employed usually reveals something of the speaker's opinion.

Although this lesson focuses on this particularly American development, it is one that is inextricably (and quite purposefully) tied to European developments in the designed environment at all scales: from urban planning, to public and private buildings, and their interiors.

The term coined by Mark Twain, the "Gilded Age" was one of exceptional wealth, and display of that wealth, among an elite class of nouveau riche. The cream of the cream of New York society was undeniably the Vanderbilt family, which left an immense built legacy. A dozen or so of the greatest works by their  favorite architect, Richard Morris Hunt, are captured in this great interactive map. With that context, consider this early work here:

While many of the most famous and glorious examples of Gilded Age domestic architecture are focused on the East Coast, the impulse to build big houses with overt historical associations was popular among wealthy Americans from coast to coast, and especially in and near industrial/commercial centers like Chicago.

Let's take a tour of one example in Rockford, Illinois:

If you're interested to know how the wealth of these tycoons, who amassed their wealth prior to the institution of income tax and labor laws, stacks up against more contemporary figures, consider this list, which attempts to put them on a level field.

The public face of the period was the American Renaissance: the idea that in this period architecture, painting, and sculpture were joined in grandiose public displays as in the time of Michelangelo, but also communicating the sense of America having risen to equally great cultural and economic heights as sixteenth-century Italy--with equally fine patrons as the Farnese at its head. (The spiritual connotations and celebration of the Church apparent in the Italian Renaissance was overlooked.)

In their efforts to shape American cities to rival or surpass European centers of commerce and culture, architects and their clients leveraged the images of antiquity as well as the smart planning of their major public buildings, from halls of governance to theatres and from libraries to train stations.

Click on the image below to launch a website dedicated to one of the great buildings of the era, Penn Station. 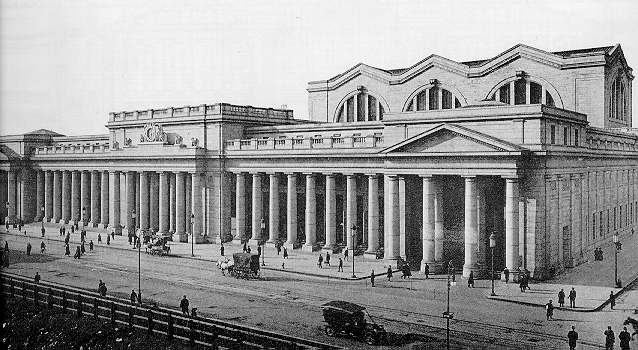 Libraries represent some of the great civic projects of the era, as they represent cultural and intellectual achievement in a building ostensibly open to all for their improvement. Watch this short film on a great one in Boston, and think about the modern/contemporary and ancient precedents drawn on by its architects (many of you will recognize something familiar in its facade from the Style/Material essay):

At the turn of the twentieth century, many recognized that American cities were in need of restoration and reconsideration, to be more proper settings for great buildings, to better act as backdrop to business, shopping, and other urban activities, and with some indication of need for amelioration of the environment of the poor.

The original example of urban planning for modern metropolises, based on traditions of Imperial and Renaissance Rome as well as French academic planning (both at Versailles and the new modernization of Paris), was the temporary project planned for Chicago in 1893, the Columbian Exposition. Its success fueled the interest among government and commercial leaders to make permanent changes to cities across the country, from Pasadena to Washington DC. Perhaps the most ambitious plan was set out for Chicago, by the mastermind behind the Columbian Exposition. Click the image below to launch a website dedicated to the 1909 Plan of Chicago. 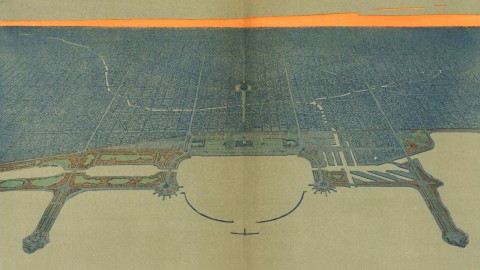 After reviewing the website--and making sure to click through the options on the PDF located on "The Plan" page--consider:

The architects engaged in the most profound Gilded Age/American Renaissance work were almost always associated with the École des Beaux-Arts, either having enrolled in the school at some point, or having learned their method from someone else, usually during their apprenticeship in architectural design. The major civic projects (buildings and urban plans) of the period show the wisdom of the École's method of planning, based on the principles of symmetry and axiality witnessed in great projects of the ancients. For example, consider the following plans (Penn Station and the Boston Public Library) and the design strategies they have in common: 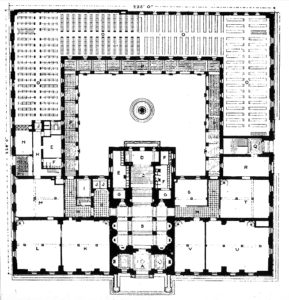 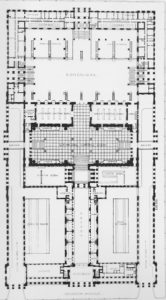 It's important to remember that the École was more about method than style, and while there was a clear preference for Classically-inspired forms and motifs, the system allowed for architects to draw from a broad variety of possible sources, combining them into something new. Because of this, architects as stylistically diverse as Frank Furness, Richard Morris Hunt, Henry Hobson Richardson, Julia Morgan and Bernard Maybeck may have a lot in common in terms of design strategy and planning devices, but almost nothing in common with their stylistic and even technical preferences.

In addition to needing to identify buildings accurately in the quiz, you need good skills of description. Lack of specificity, especially through comparisons/contrasts, is the most frequent way that people lose points on these quizzes. To help you prepare for the upcoming quiz, you may find it helpful to review the first quiz, which has been handed back to you, and think about not just its content, but the way you used language to make your points. To assist with sharpening your word choice, I have prepared an exercise based on the first quiz. It is optional, and you can find it here:

Planning at the urban scale: visit the Columbian Exposition.

The head planner for the Exposition, Daniel H. Burnham, soon made a name for himself in the realm of urban planning, making important interventions in places like Philadelphia, Cleveland, Washington, and again in Chicago.