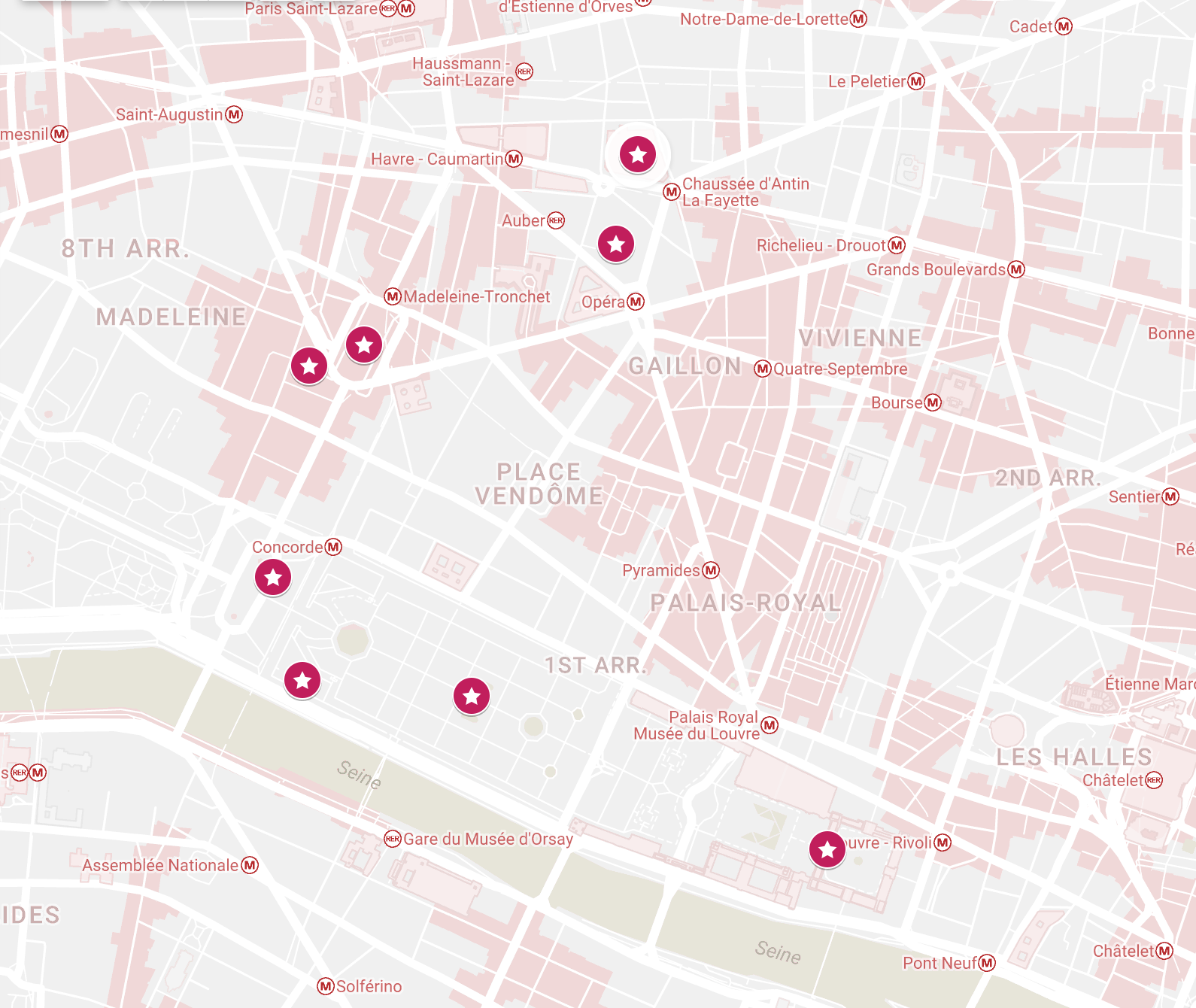 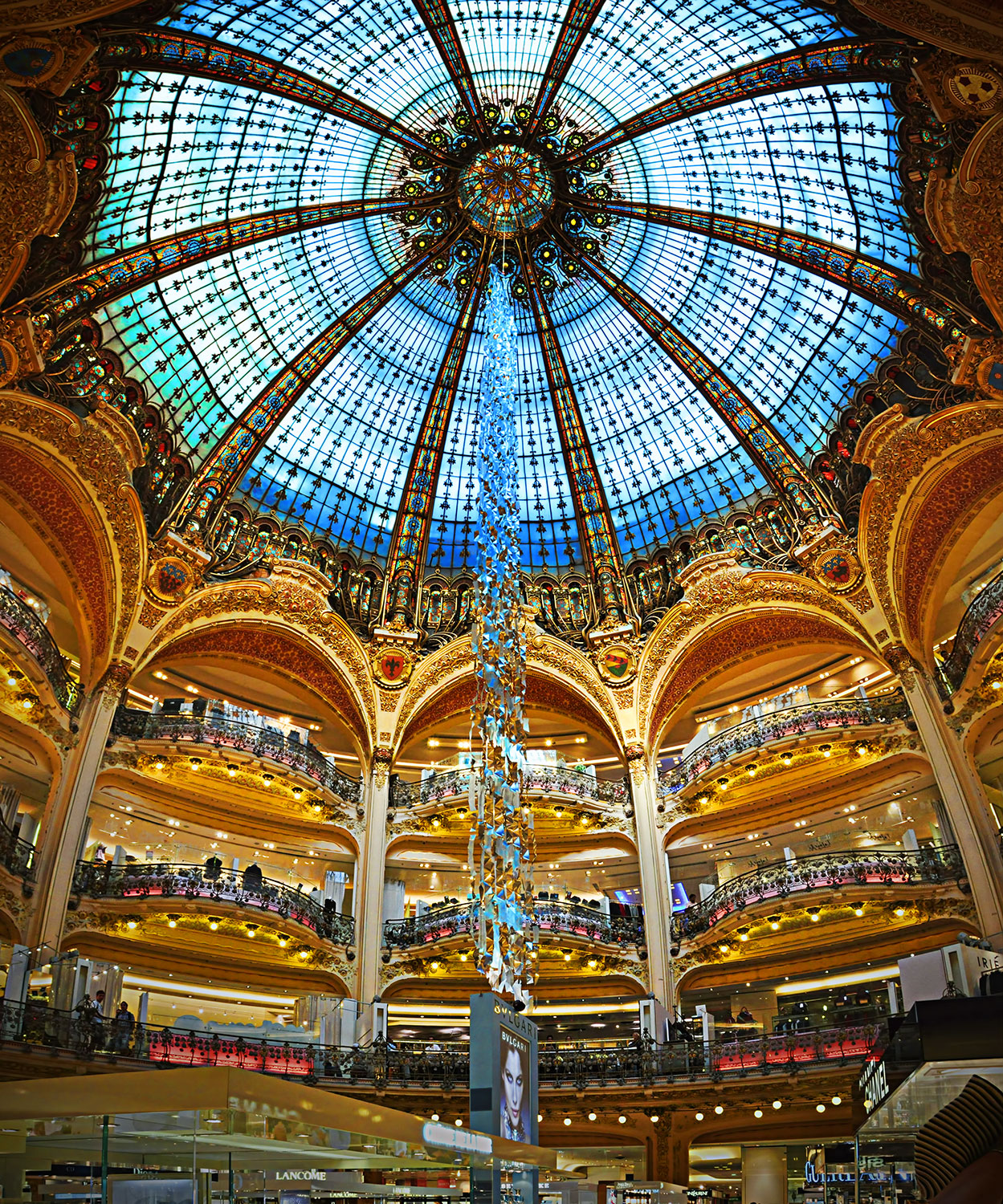 One of the great cultural landmarks in this part of Haussmannized Paris. Flagship department store on the Boulevard Haussmann that grew from a small haberdashery founded by Théophile Bader. By 1896 the company expanded into a bigger building, and kept expanding, until constructing this behemoth (over 750,000 SF)  in 1912. Somewhere between French Classicism and Art Nouveau, the store features a 140' spectacular stained glass dome inside, along with other decorative details (ironwork in particular) that  is the work of many artists brought from the famous École de Nancy. 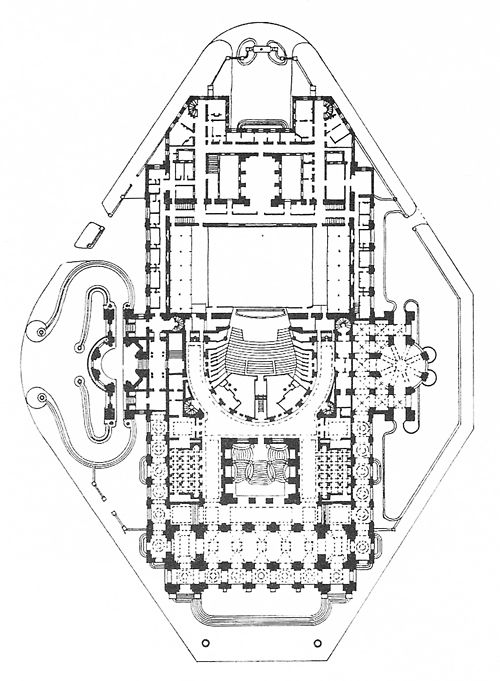 Built as a centerpiece of Napoleon III's modernization of Paris and as a tremendous symbol of the cultural might of the Second Empire. Designed by École des Beaux-Arts trained Charles Garnier. Facade terminates one of the new boulevards designed and directed under Haussmann. Four multi-figure groups by different sculptors represent poetry, music, dance, and drama. Gilded busts of composers are between the columns. Immediately inside is the great lobby with grand switchback staircase surrounded by arcades, about the same SF as the auditorium. Everything at vast scale and with exuberant decoration.

Designed as a temple "to the Glory of the Great Army" under Napoleon (similar to the nearby Place Vendôme) on the model of the Maison Carrée. After Napoleon's ouster, changed to function as a church. Pediment sculpture represents Last Judgement (with Mary interceding on behalf of the damned; designed by Philippe Joseph Henri Lemaire). Rededicated again as a monument of reconciliation following the Revolution. Vaulted inside and covered in lavish gilding throughout. 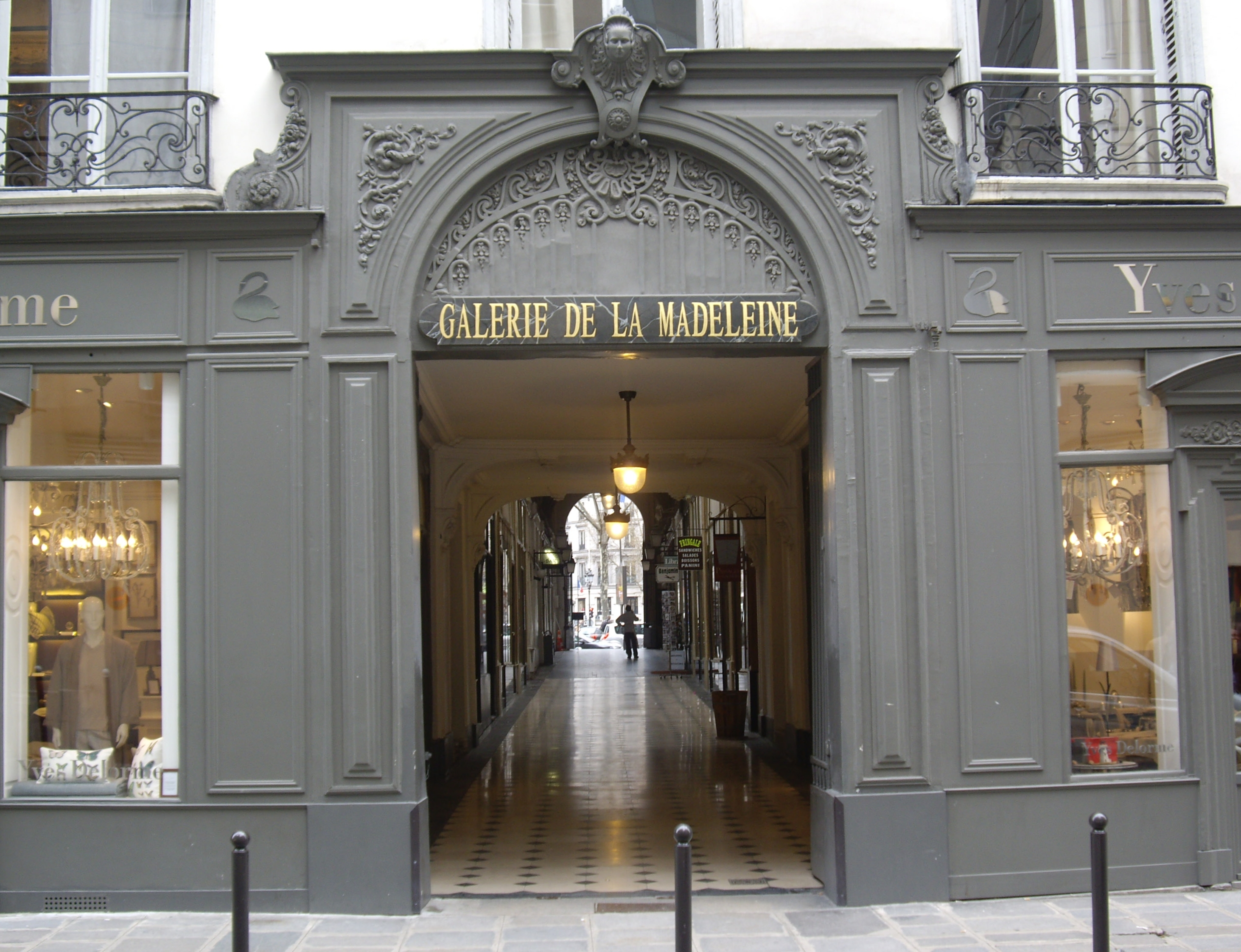 Covered passage between 9 de la Place de la Madeleine and 30, Boissy-d'Anglas. Constructed at the start of construction of the church. Caryatids at the main entrance. One of dozens of similarly elegant, covered passages throughout those parts of the city that were especially fashionable through the nineteenth century. 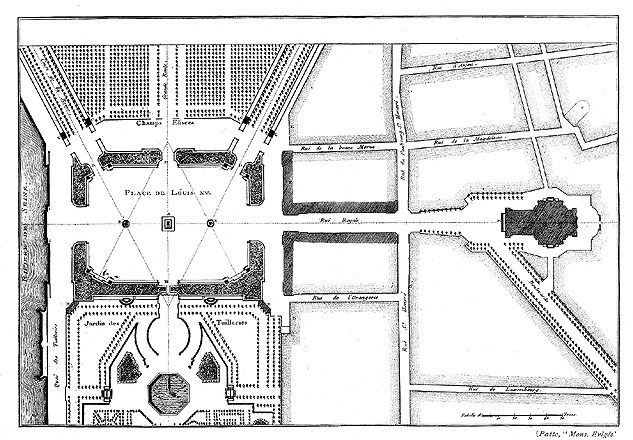 The largest square in Paris (over 20 acres), a major intersection with the Champs-Élysées stretching to the west and the Tuilleries to the east. The northeastern corner is the western end of the Rue de Rivoli.

Originally named Place Louis XV to honor the current king, renamed after the Revolution (at which time the original sculpture of the king was removed; Louis XVI and Marie Antoinette executed here by guillotine in 1793). North end defined by twin buildings (Naval Ministry to the east and a lavish residence for a duke--now a hotel--to the west). Really an elongated octagon, each corner features statues representing French cities. At the center is a 75' tall obelisk from the temple at Luxor, a gift from Egypt to France in 1833.It is flanked by two fountains designed by Jacques Ignace Hittorff on the theme of rivers (north fountain, with figures representing the Rhone and the Rhine) and seas (south, representing the Atlantic and Mediterranean) and inspired by fountains in Rome. Each has figures representing industry and agriculture as well. 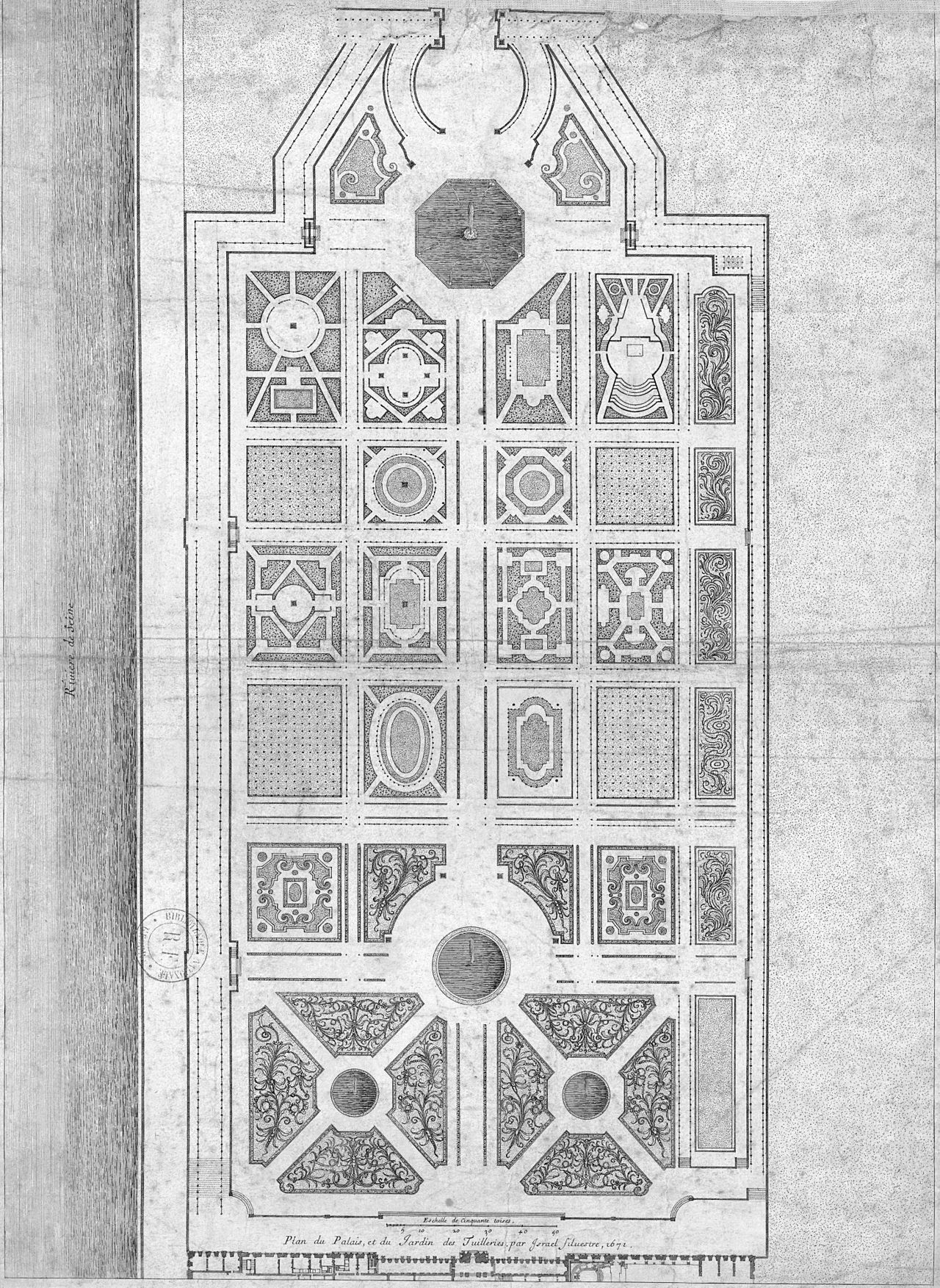 Extensive public garden under development for centuries. First set out by Catherine de Medici as a private royal garden on the Italian model (geometric squares, fountains, a grotto) when she moved to a new palace here, apart from the Louvre, after Henry's death. Restored and extended under Henry IV, who directed a covered promenade along its length. Vast redesign at the same time as Versailles in the French mode: symmetry, order and long perspectives defined by parterres and allés defined by trees. Opened to public in 1667. Many other improvements made through the centuries, but it main lines go back to the 17th c. 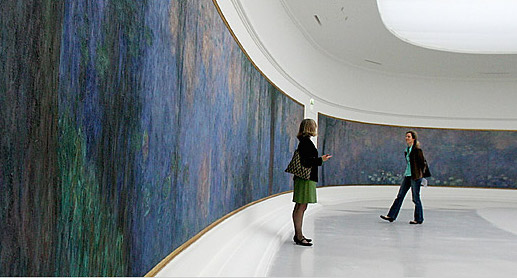 Art gallery in the Tuilleries' orangery (which was designed to do just what it sounds like) founded in the 1920s. Featuring work by such artists as Renoir, Cézanne, Matisse, and Picasso, most famous for the sweeping Water Lillies by Monet, painted in 1922 and displayed in oval rooms. 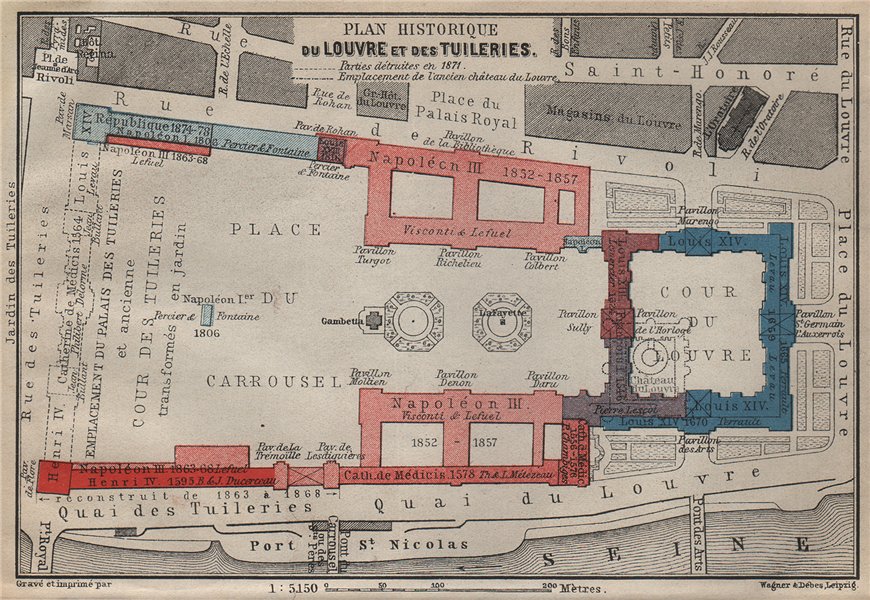 Starting as a late-12th c. square fortification at the outskirts of the city, the Louvre changed as its environment developed. The kings only rarely came to the capital, so it was not 1525 that a king decided to make it a royal residence and it was rebuilt. Across the centuries, wings were added (perhaps most famously, the 1666 east front by Perrault and the 1850s addition by Lefuel that included work by a young Richard Morris Hunt). The building opened to the public as a museum after the Revolution, in 1793. The collection grew exponentially under Napoleon. Its most notable 20th-century addition is the Grand Louvre, a glass pyramid by I.M. Pei (1983-88). The most recent extensive addition is the galleries for Islamic art (2012), which fills the Visconti Courtyard with an undulating roof of steel and glass.