Paris: guide to the Musée d’Orsay

One of the great adaptive reuse projects we’ll see this trip (maybe second only to the Pantheon), this is the train station built in 1900 and repurposed in 1981 (with a design by Italian architect Gae Aulenti) to house the collection that was too modern for the Louvre and too old for the Pompidou. Aulenti’s interventions are pretty sparse, creating fine gallery spaces without spoiling the brilliant sky-lit concourse.  There is so much to see here, so let’s just try and focus on some highlights, with the overarching note that you should get there early and start way up high, with the Impressionists, if you’d like to minimize the crowds. Here’s what there is to see: Posters, picture, chairs, bowls, and umbrella stands galore, all from late 19th c. and from across Europe (with obvious preference for France). Especially notable are the fully paneled and furnished suites of rooms by Alexandre Charpentier.

In addition to the building itself, you’ll find lots of drawings, including original (and very large) charcoal and pastel studies by Guimard of the metro stations, as well as academic studies of Classical buildings by École des Beaux-Arts scholars (Garnier, Mucha, Paxton, Van de Velde, Viollet-le-Duc). Brace yourself for the model of the Paris Opera overseen by Garnier himself in 1862-3; it is huge and carved from cherry wood. It is made of several sections to as to allow views to interiors. (And that reminds me: when you’re in the neighborhood, make sure to pop into the Panthéon and, in addition to marveling at the building, check out Soufflot’s likewise huge wooden model of the church.) So much, and much of it brilliantly illumed from above in the main hall 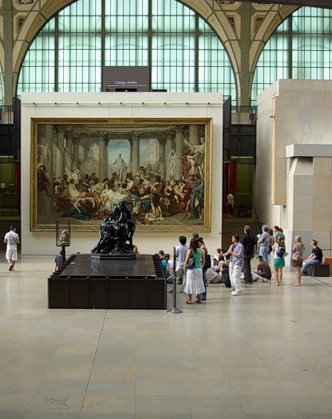 This is the place to come for developments in the second half of the nineteenth century, so let’s take a peek at some of the greatest examples of:

Realism: Emphasis on naturalistic, accurate, objective manner, but also with a rejection of conventional beauty or idealization, even emphasizing the “low” or common, especially among French painters here in the 19th c, as a rebellion against traditional historical, mythological, and religious subjects, often with a quality of social justice at the root.

Impressionism: A multi-faceted movement, with many approaches to a general interest to avoid academic teaching and subject matter. Like the Realists, the Impressionists were interested in the common and regular and contemporary scene to celebrate the common within their largely middle-class experience. Realists look for a common experience that may or may not be “beautiful;” the Impressionists are after a sense of beauty, as seen in an immediately visual impression, especially by capturing specific conditions of light and atmosphere. The Impressionists coalesced in 1874 when several of them (including Cézanne, Degas, Monet, Morisot, Pissarro, and Renoir), whose work was reject by a traditional academic exhibition, , joined together for the “rejected” expiation.

This is a giant painting in every way. Besides being physically big (22 feet wide), it is significant revolution in French art for its treatment of a funeral of an unremarkable person (the artist’s great uncle) populated by unremarkable people shown in stark, unflattering, unsentimental realism. The size matters since pictures of this scale were usually reserved for heroic images of the state or church (note the history paintings you saw in the Louvre). Look around for other such subjects by Courbet: stone breakers, peasants.

If you can find a more engaging oil painting of cattle breaking the soil at the start of the planting season, I’d like to see it. Try and look away from those googly bovine eyes. Even without the significance of her gender, Rosa Bonheur’s work would be remembered within French Realism for its focus on everyday life, rural customs and regional flavor.

The Gleaners are destitute peasants who “glean” the harvested land for any scraps that remain after the best grain has been taken away to feed the wealthy people who live in the prosperous town in the background. Millet’s work is another great example of Realism, shown more emphatically and with greater aesthetic care for beauty than the work of Courbet. Meant not just to portray regular people (like Courbet) but also to elevate them, draw attention to their labors as the bedrock of society. (Consider that the French Revolution is still in living memory for many people at this time; wealthy elites were not crazy about Courbet & Millet.) Not as big as the Burial, the Gleaners still large for what most people would dismiss as a “genre scene” of unimportant people. A radical painting! In history, nude female allegories have been acceptable for millennia; but placing a naked woman (her nudity underscored by her clothes being shown in the painting and in contrast to her fully-clothed male companions) in the company of men was shocking. It was and is hard to understand in traditional art history methods, since it is difficult to understand this either allergically or realistically. Is she a personification, or just a naked woman? If the latter, what’s going on here? This is especially true considering that the three people (four, actually, if you think of the woman in the pond), are not really interacting (except for the men), and the unabashed way that the woman looks directly at you, with no shame at all. It’s also remarkable for the “unfinished” quality of Manet’s brushstrokes, often seen in Realism. Berthe Morisot is the second significant woman featured here. Her work takes us into a different realm; no more unflattering peasants since that was worlds away from her comfortable life. Morisot exhibited with the painters who would be knowns as the Impressionists. As is typical among the modern painters in the 19th c., her subject is average and every day (compare with the fancy subjects at the Louvre), at least to her: as a woman, her movements through the city was partially curtailed, so her works tend to focus on domestic and high-society scenes (as is true of her American friend and co-exhibitor, Mary Cassatt). You may see a few portraits of her by Manet, who was her brother-in-law. Degas was grouped with the Impressionists and you can see why: modern, urban life, portrayed in an instant of action. But there’s other stuff going on with him, too. Besides the fixation with chorus girls and dancers (often shown at rest or off stage), his work shows the strong influence of Japanese prints in the era: note asymmetries, tipped floors, unsettling perspective. He rejected the term “impressionist” and the practice (or sense of it) that the paintings were made on-site, often out-of-doors, spontaneously. He studied compositions and carefully constructed his paintings and pastels—the latter of which have a sparkle of color that is worth a look-see. Throughout his life he studied the Old Masters at the Louvre and thought of himself as more of a Realist that Impressionist. Note how his early palette, which is darker (like Manet), gives way to the lighter and brighter colors of Impressionism later. 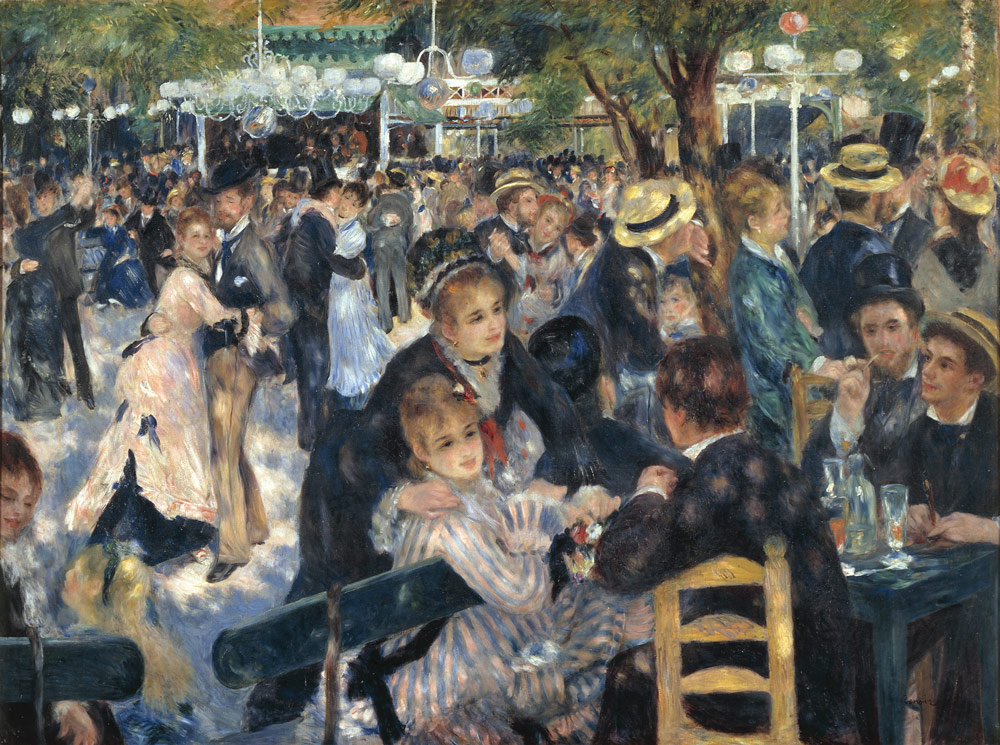 As the School of Athens is to Renaissance frescos, so is Renoir’s Dance to Impressionist paintings. It’s a normal Sunday in Montmartre, with working class Parisians taking the day to dress up, go out and enjoy themselves. Lively in composition, movement, and amazing capture of flickering light under the trees of the outdoor café.

Hopefully you know Monet from the Art Institute of Chicago (where you will see several these French painters, actually). Here we have the interest in modern life turned to a most modern subject: the train, its station, and the plumes of smoke that mix with the fog and mist of Paris to create a strong sense of atmosphere. This is from one of his first years in Paris, starting up with urban subjects after all those years with the haystacks.

Our last Impressionist is, in a way the first: Caillebotte was a former architect who directed a portion of his inheritance to supporting his own career in art and those of his friends, including most of the Impressionists. Many of the works in the museum (including Renoir’s Dance) were in his private collection and donated, at the time of his death, to start the collection. A great painter in his own right, Caillebotte (artist of the Paris Street, Rainy Day at the Art Institute) was an Impressionist in his choice subject matter and in its general means of quick-moment portrayal, but different in what is clearly an architect’s eye for setting and perspective.