Note: numbers preceding the building names refer to their locations on the Ruta del Modernisme site. 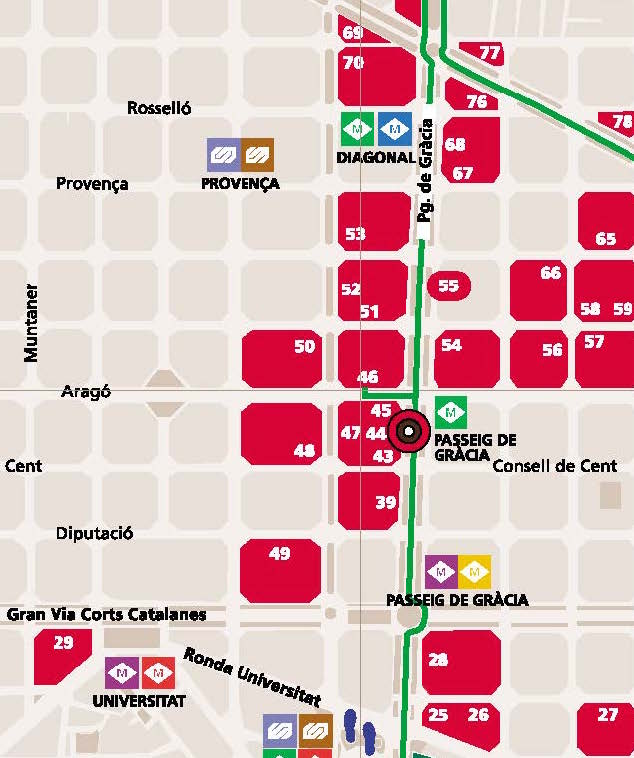 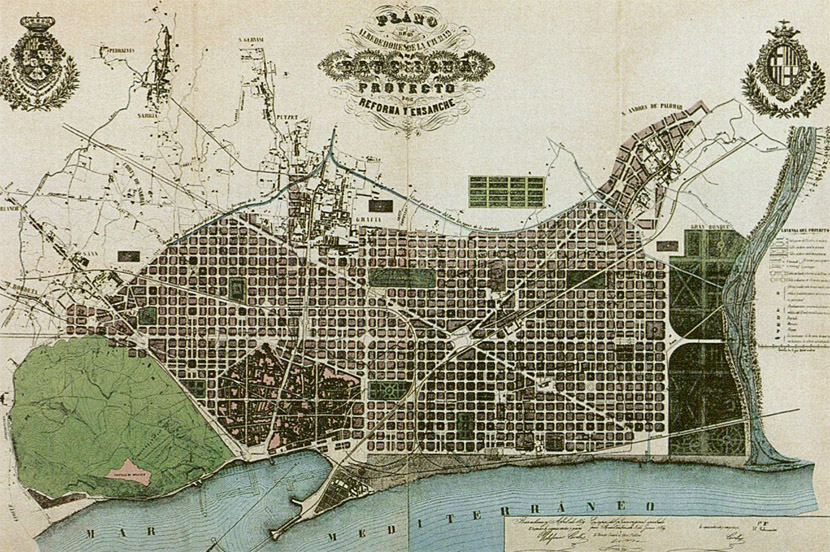 Massive expansion of the city above the old city, designed on a perfectly regular grid of chamfered squares separated by broad avenues.  The whole was considered a sum of parts, each diminished unit having basic services meant to spread a utopian, egalitarian lifestyle among the varied residents of the district. Significant as the place that was filled out with the astonishing efflorescence of Modernista architecture by Lluís Domènech i Montaner, Antoni Gaudí, Josep Puig i Cadafalch, and others. 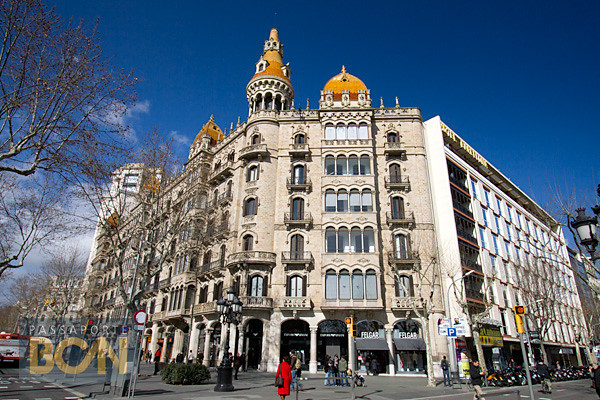 One of the largest architectural complexes in the Eixample, built as a single architectural volume. Neo-Gothic. Note stone façade, striking set of bay windows on the corner of Carrer Casp. 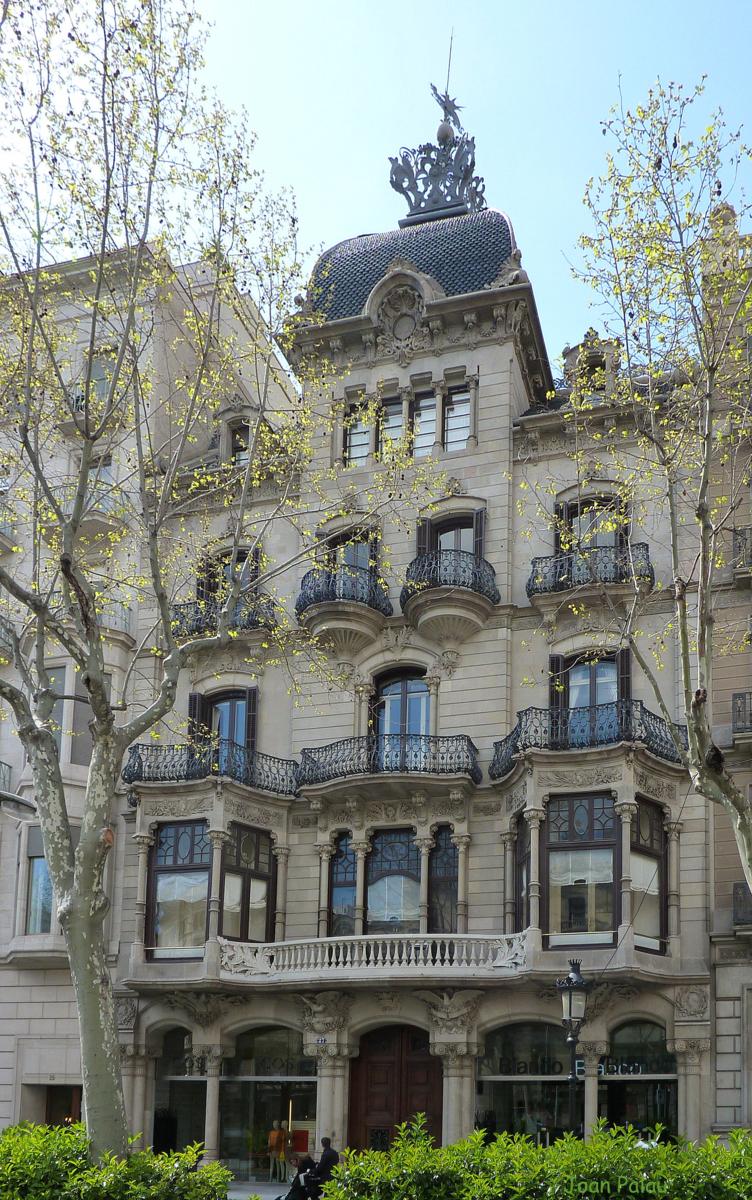 Originally designed as a dwelling for several families. The most outstanding features of the building are the spectacular dome and the wrought iron lamp-posts in a foyer in which the elegant frescos and the coffered ceiling are also worth seeing. Features elegant, if somewhat deteriorated, marquetry on the set of bay windows on the façades, sgraffito work (decoration made by scratching through a surface to reveal a lower layer of a contrasting color, typically in plaster or stucco), and sculptural elements on the ground floor and the cornice 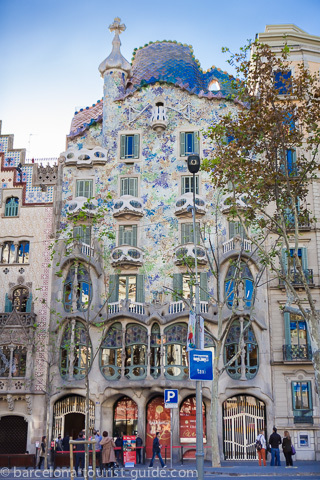 Batlló was an ostentatious textile tycoon who hired Gaudí to remodel a house built in 1870. He added a 5th floor and rebuilt interior walls to make a building with no right angles. Façade combines stone on the ground floor and the piano nobile with a mosaic facing on the higher floors (trencadís, a type of mosaic used in Catalonia, created from broken tile and ceramic shards), and is crowned with a scaly tiled roof. Some interpret it as an architectural manifestation of the tale of St. George, the patron saint of Catalonia. The roof represents the dragon’s back; the ‘tower’ is the sword; the iron balconies and first-floor bay structure are skulls, bones and tendons of the dragon’s victims. Alternately, some see an allegory of Carnival: the roof a harlequin’s hat, the balconies like ball masks, the ceramic tiles like confetti. Spectacular interior with tiled light well with graded colors. Not much original furniture left; but some preserved at MNAC. 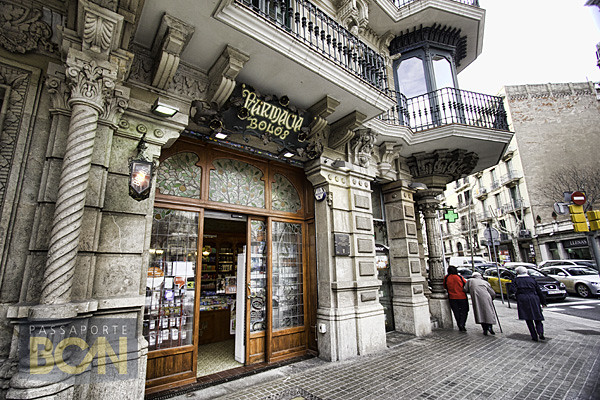 Retains most of its original decorative elements: a fine lamp bearing the name of the shop, stained glass windows, and furniture, all designed by the great craftsman Antoni Falguera. 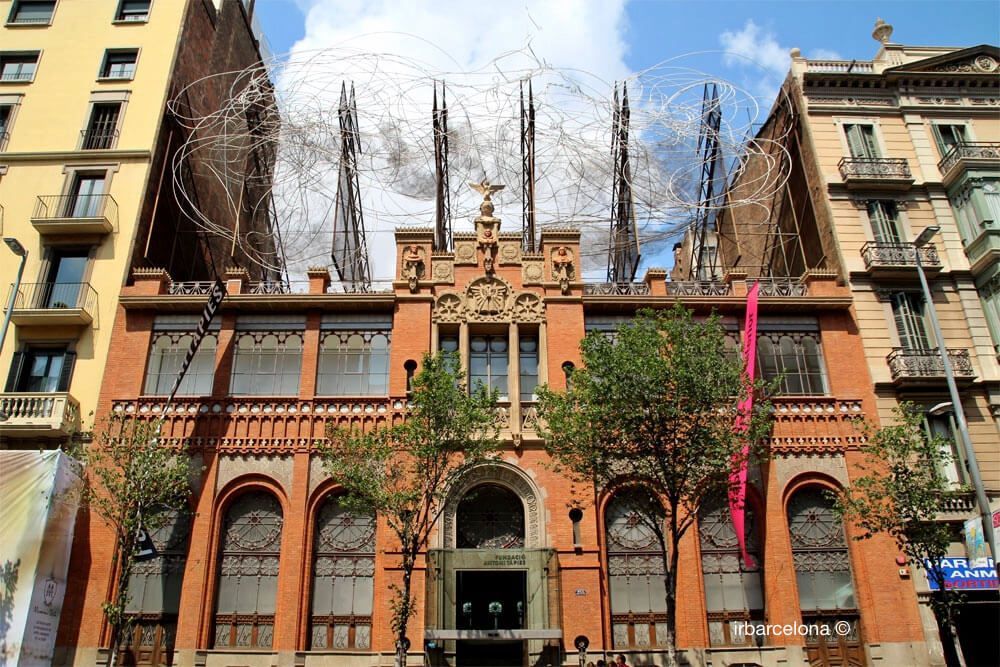 Great example of the Neo-Medieval style. Features three semicircular arches giving onto the street and slender columns supporting the bay window on the façade.

Begun by another architect who resigned in 1891, having completed the first and second floors. Completed for owners of a publishing firm. Note decorative elements that recall the art of printing. Rich decoration with mosaics, sculpture, massive stair and huge skylight. Interior: lots of sculpture by Eusebi Arnau, woodwork by Gaspar Homar; glass by Antoni Rigalt. Currently home to a delegation of government from Madrid. 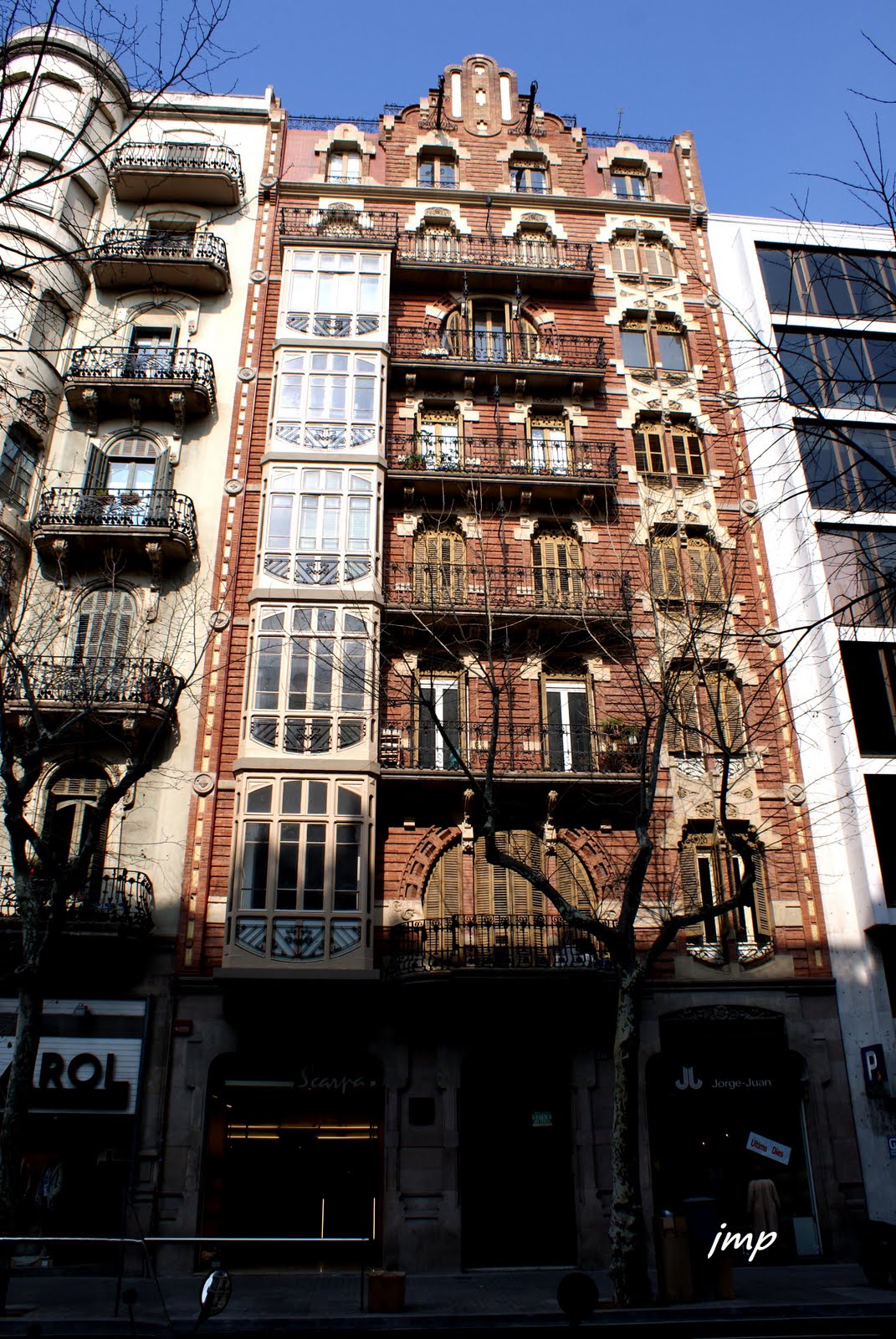 Built for the architect’s own family. Asymmetrical distribution of the exposed masonry façade with a bay window on one side offset by a line of windows on the other. 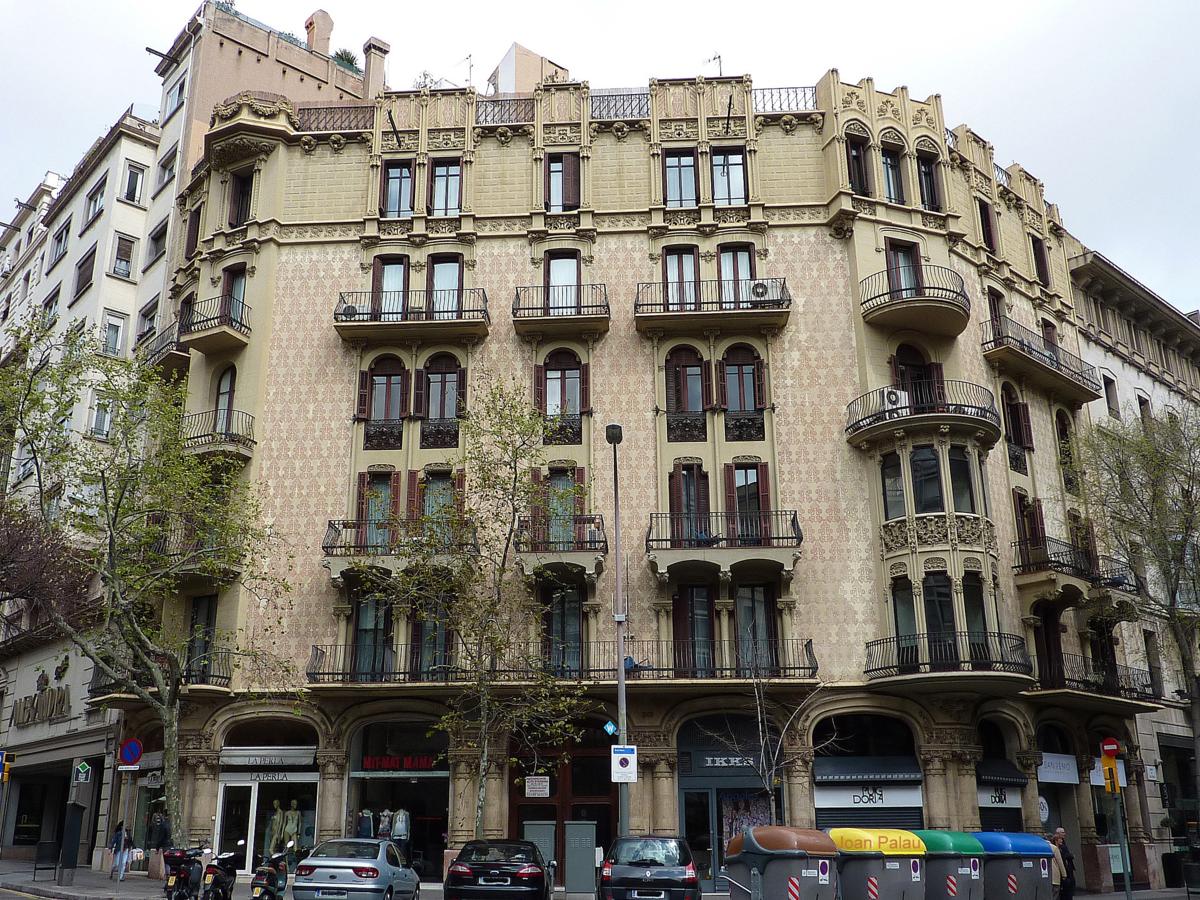 Much altered since construction, especially at roof. Maintains original elegant pink sgraffito work and false arches with columns and capitals.

Gaudí’s last residential project replaced a modest 3-story building. Built for a property developer who loved novelty, fashion, and thus Modernista. Façade clad in rough-hewn limestone blocks and wrought-iron balconies. Some people see the inspiration of medieval fortresses here, with chimneys that look like sentinels with helmets. Inside it’s more delicate, with painted ceilings and foyer. The underground coach house could be considered Europe’s first parking garage. In general, building is a figure-eight plan. Attic visit reveals the unusual structure of 270 parabolic arches that support the roof, which was described by one Spanish poet as a “warriors’ garden.” Chimneys are clad with marble fragments, trencadís, and in one instance, the bottoms of champagne bottles. The client’s unhappy wife redecorated the main floor in the Louis XVI style in 1926.

Residence of painter Ramon Casas and writer Santiago Rusiñol. Façade is a blend of medieval and Renaissance design principles with Modernista decorative elements.

Veritable compendium of the architect’s capacity for design and elegance. Everything is exemplary: from the wrought iron door to the highly-ornamented foyer with Mudejar details, Roman mosaics, polychrome woodwork, sgraffito work and wooden lattices. Note the double façade: (1) facing toward Av. Diagonal, a noble Gothic and Plateresque forms with an abundant floral decoration and the appearance of a a great mansion; (2) rear façade (giving onto Carrer Rosselló) reveals the building as a block of flats. Appropriately, this Catalan Modernisme tour de force is now home to the Institut Ramon Llull, which promotes study of the Catalan language.

Perhaps the most representative multi-family dwelling by the architect. Monumental, wth Secession influences. Grandiose single-family urban mansion, now backed by an unsympathetic glass façade (1987). Two wings forming an angle give onto Rambla Catalunya. Note the Plateresque (style of decoration in Spanish architecture inspired by low-relief silver work) door influenced by a famous Renassiace building that once stood in Barccelona and was demolished in mid-19th c. Synthesis of other inspirations: balconies and windows combine Gothic and Renaissance elements. Now home to the Provincial Council of Barcelona. 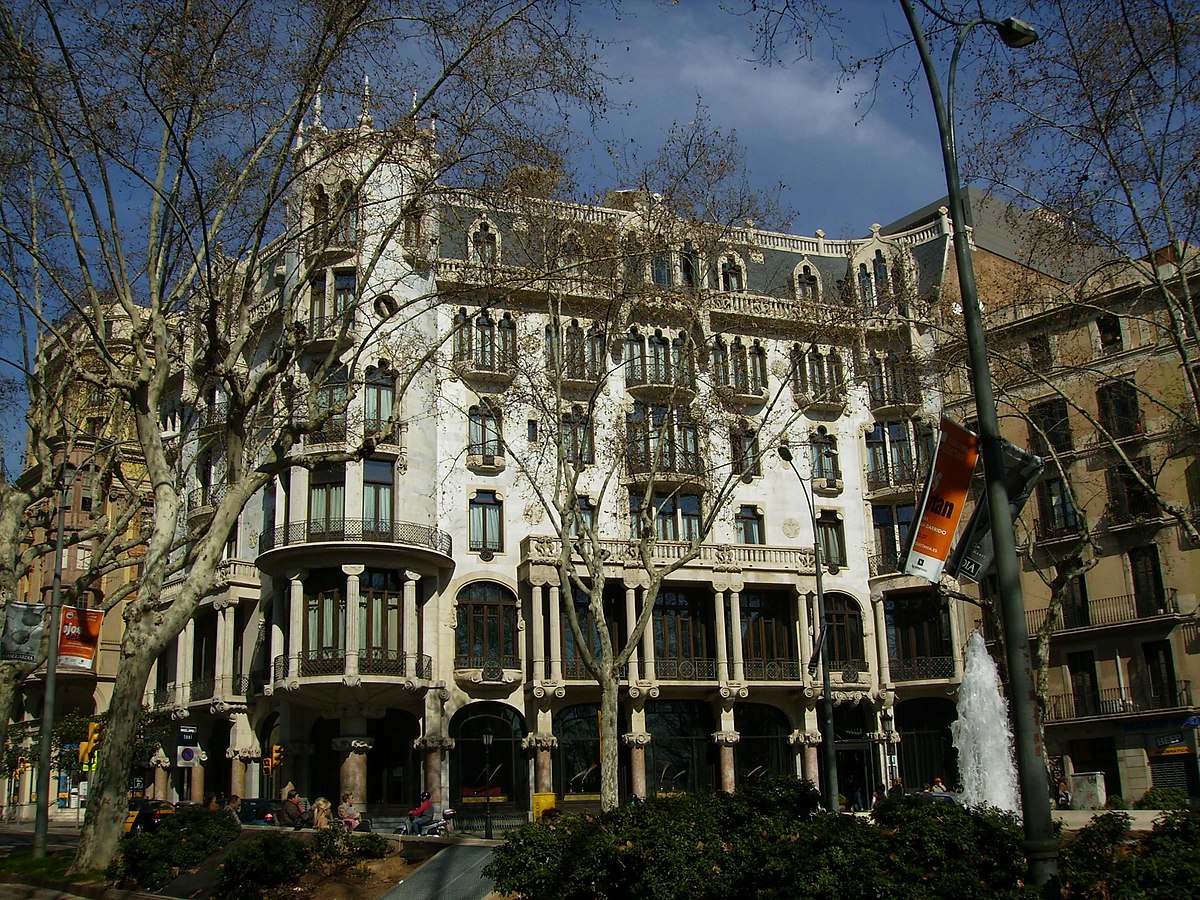 The architect’s last work in Barcelona, which also marks the end of Passeig de Gràcia. Façade’s cylindrical tower is typical of the DiM, adorned with sculptures that simulate swallows’ nests, and a curious (and unusual) French-style attic. Intended tower design never completed; DiM’s Hospital de la Santa Creu i Sant Pau for a taste of what it might have been like. The culturally significant Cafè Vienès once occupied the ground floor, and the dance hall El Danubio was in the basement. Now a spiffy hotel.

Façade with a striking sculptural treatment, particularly the bay window, which gives it an exceptionally monumental appearance. 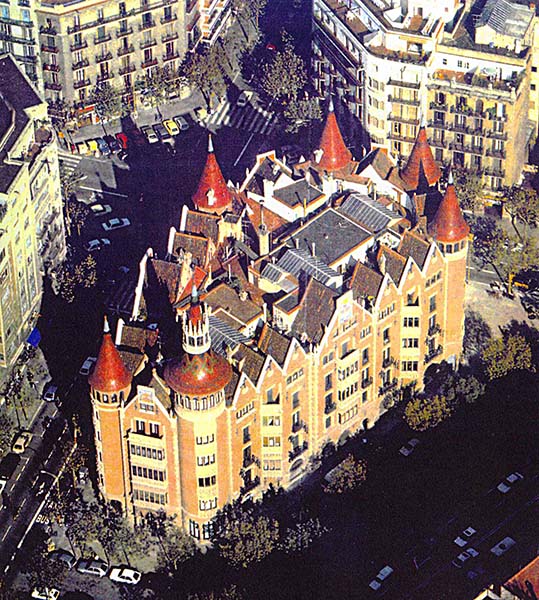 The "House of Spikes" was built to house three sisters in neighboring units that look like one giant medieval castle. Spectacular brick and tile work.

A conservative version of Gaudí.

Apogee of Catalan modernisme and Catalan nationalism in form and function. Tour de force concert hall for the Orfeó Català, founded in 1891 to preserve and popularize folk song and its relationship to Classical music. 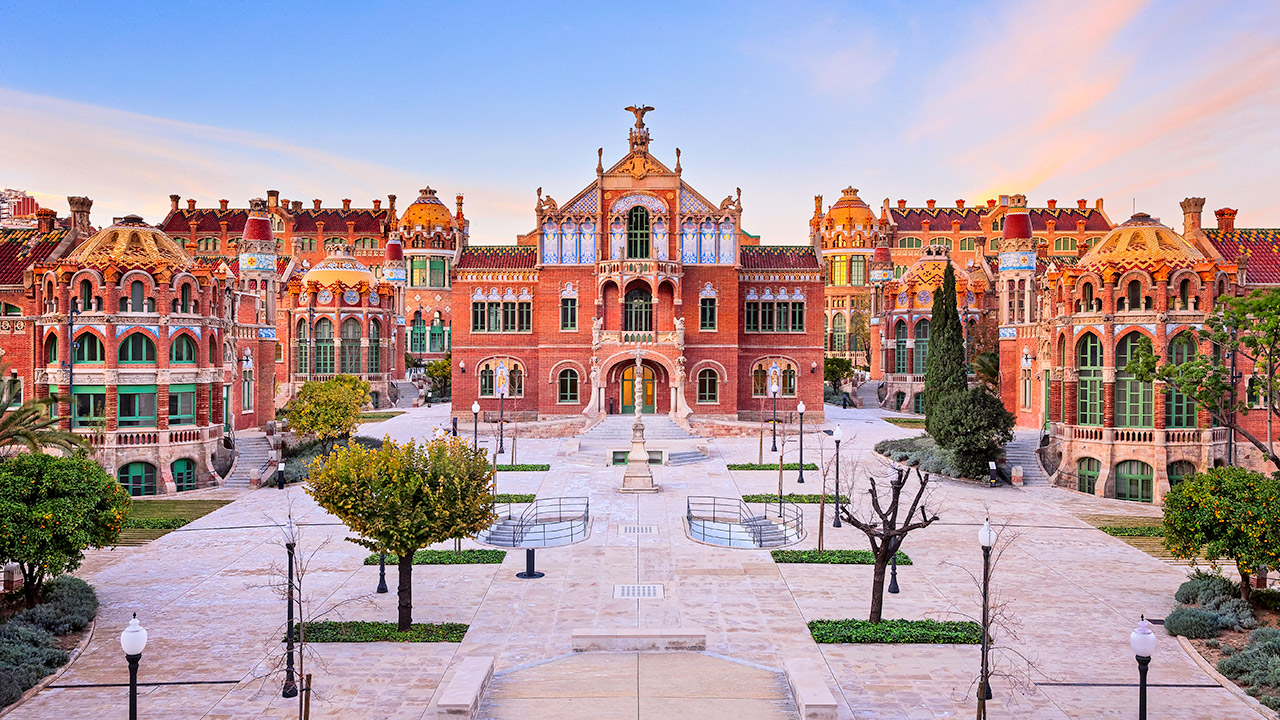 Domènech's final word on Catalan modernisme, here turned to the beneficial effects of art on health. A gathering of individual, unique pavilions awash in mosaic, sculpture, glass and woodwork, connected underground to ensure the functionality of the hospital. Includes a fancy cafe.

A failed housing project for Barcelona's super-rich turned into a public park.

House built for a brick and tile manufacturer in in a fusion of the modernisme and Neo-Mudéjar styles, famous as a very early work of Gaudí.

Founded in 1883, the cemetery has one of the best views of the sea anywhere in Barcelona. Significant for opening at the time of modernisme's flourishing, which is revealed in the design of the memorials throughout the cemetery that date from the 1880s-1910s. 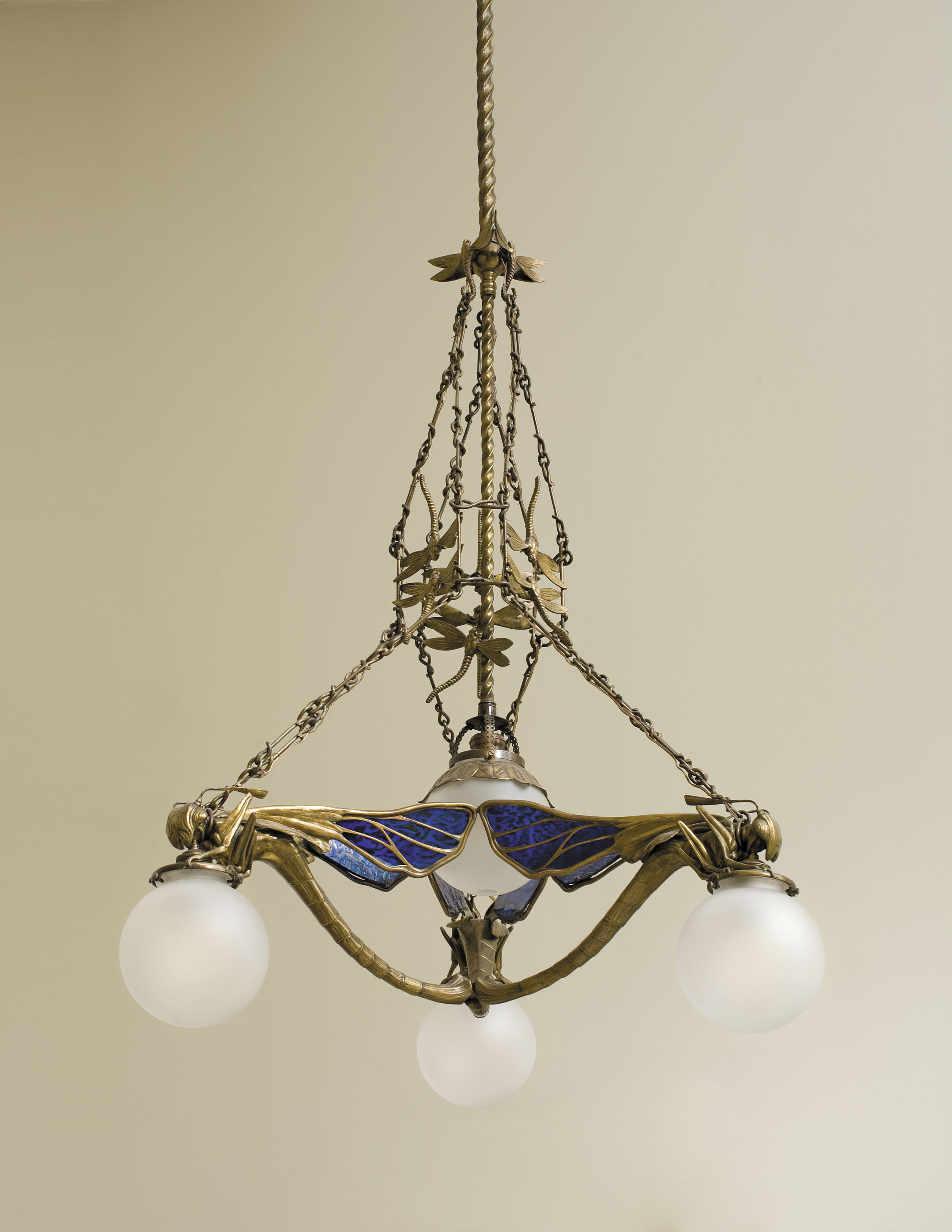 National Museum of Art, in one of the buildings of the 1929 Exposition. Lots of modernista furniture (& other decorative arts) within a collection that spans from the Middle Ages through the 20th century. Particularly strong in Romanesque painting, modernisme and noucentisme Catalan art.