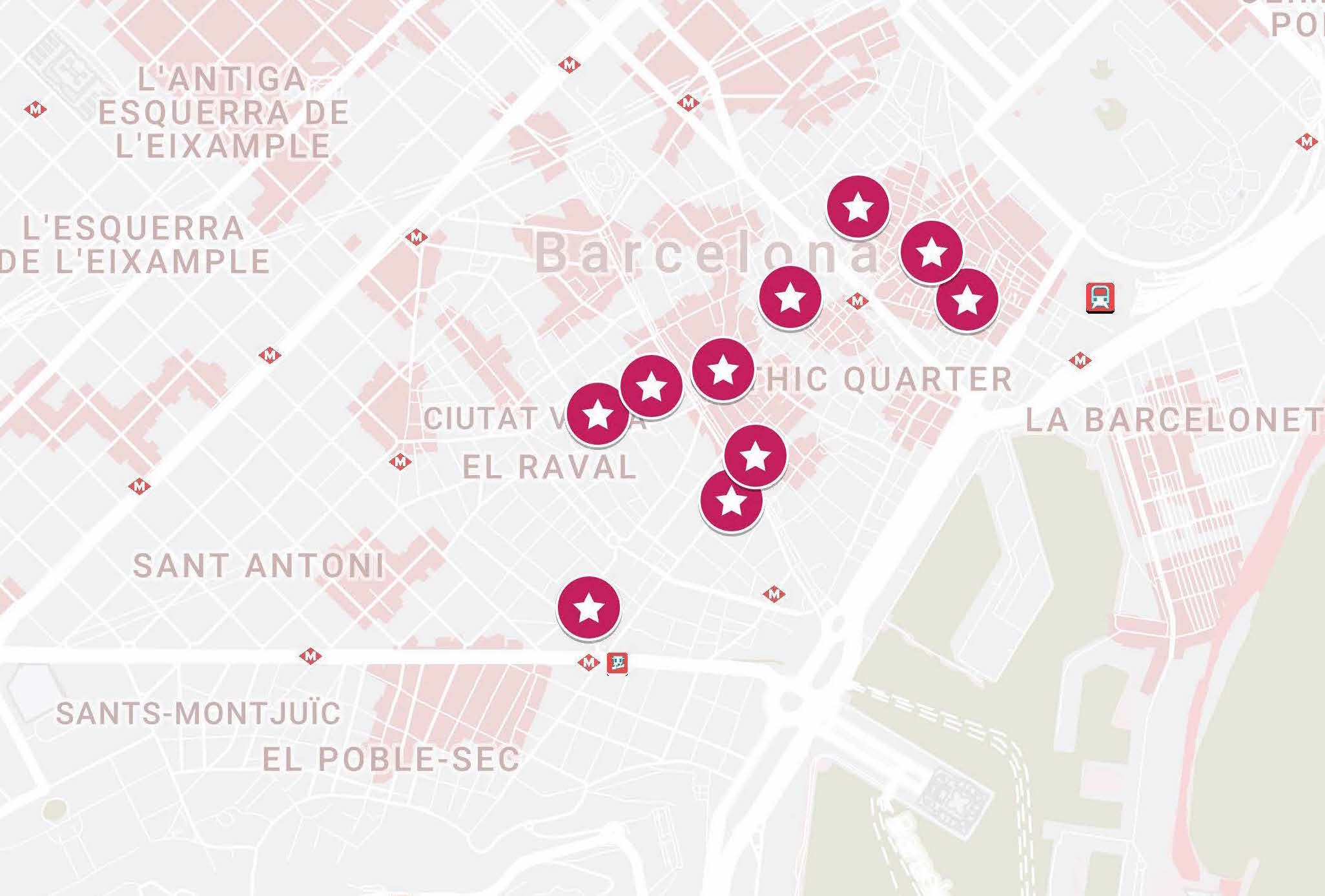 "St. Paul in the fields" was well outside of the city when it was constructed. Church and former monastery, the latter of which dates to late 10th c. as an institution. Sacked by Muslims in 985, rebuilt starting in 1096. Cloister, church and monastic quarters by the 13th c. Monastery closed with secularization by the Spanish government in 1835.

Built for industrialist Eusebi Güell as family home. Horse-drawn carriages accommodated under parabolic arches fitted with iron gates. Forged work is characteristic of early Gaudí in conjoining images of horse whips and seaweed. Basement stable is a predecessor for the underground car park built many years later at Casa Mila. Less colorful than his later works, the luxurious house reveals the architect's interest in synthesizing Gothic and Islamic precedent with his new, personal idiom. Interiors are lavish (mosaics, art glass, more parabolic arches) and the structure is innovative; worth the visit to see where Gaudí begins.

Around 1900 Güell approached Gaudí with the idea of building a housing site on  a rocky hill elsewhere in the city. That venture failed but the remainders of it survive as the Parc Güell. Fun Fact: Picasso began his "Blue Period" in a studio across the street at Carrer Nou de la Rambla 10, where his hatred for Gaudí’s architecture solidified.

Covered pedestrian way that connects La Rambla with the Plaça Reial. One of the first passages covered in the city.  Arched opening flanked by pilasters; iron and glass roof.

The Royal Plaza, built on the remains of a deconsecrated monastery. At the center of the classically-ordered square is a fountain named for the three Graces portrayed in it. The surrounding 3-4 story buildings relate to more Classical Spanish trends in the mid-19th century. Lanterns were designed later in the century by Gaudi. 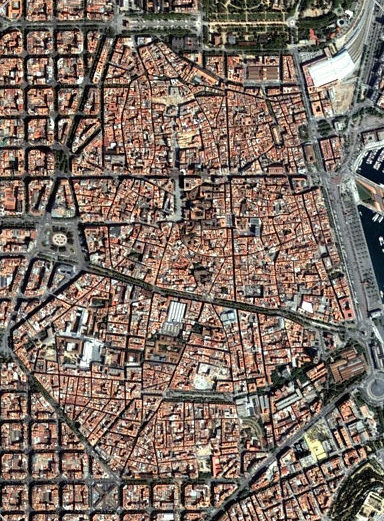 Medieval center of the city, bordered by La Rambla, Via Laietana, Ronda de Sant Pere and the sea. Much has been rebuilt starting in the 19th c., but it also preserves a glut of medieval structures, including the Jewish quarter (El Call), as well as older sites (like remains of the Roman wall). 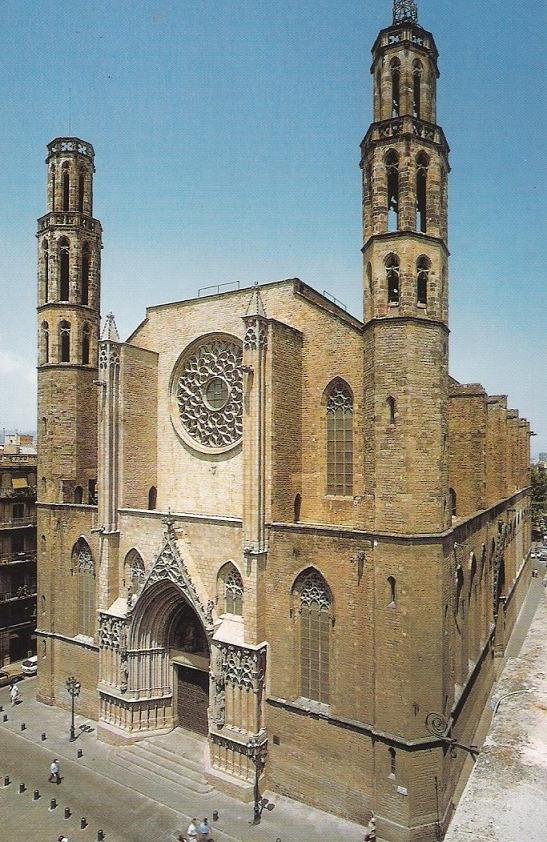 St. Mary of the Sea, built at the height of Catalonia's flourishing as a maritime power, and evidenced by the relatively quick construction period, which also accounts for its stylistic consistency--rare in medieval buildings of this scale.

The well-documented construction began on March 25, 1329, to the designs of Montagut, a Catalan master builder whose name is associated with other large churches in Manresa and Majorca. The building was damaged in a 1428 earthquake that required the replacement of the rose window in the west end, which was replaced in the newer Flamboyant style (1459). Additions were made to the interior through the 19th century. Northwest tower finished in 1496; the second in 1902.

The interior is light and spacious, with an unusual plan for the period: the side aisles meld as an ambulatory and there is no transept; further spatial simplicity is achieved through the side aisles reaching the same height as the nave. Planning is consistently proportional: considering the chapel depth as a unit, the side aisles measure 2x, the central aisle 4x; the width of the church is equal to its height. Ribbed vaults on octagonal columns on a very wide bay system, over 40' between columns. Lack of interior imagery is in part due to an early 20th century fire. 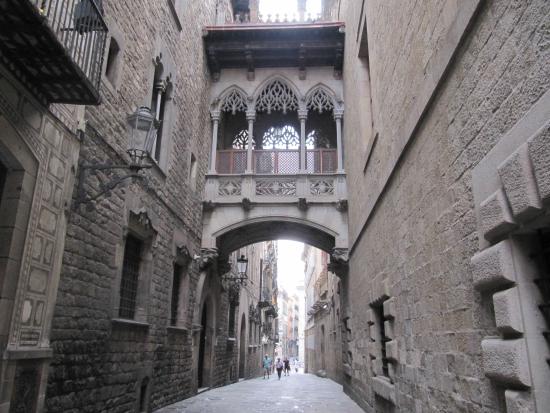 Preceded by a historic lane that left the main gate of the city and continued all the way to Rome. In the 12th century the family Montcada urbanized the area by paving the road and building many palaces along it; such construction lasted into the 18th c, with its greatest construction in 15th-16th centuries, when it attained its aristocratic character. Fell into decline as the city grew and new developments expanded to the north with the construction of the Eixample. The preservation of the street as a monument of Spanish culture began in earnest in 1930. The Berenquer d'Aguilar Palace was the first to be restored, and adaptively reused as the Picasso Museum (1963). Other sites of special note include the Casa Cervelló-Giudice (number 25, now the Galerie Maeght) and Marquis de Lion (Disseny Hub Barcelona) 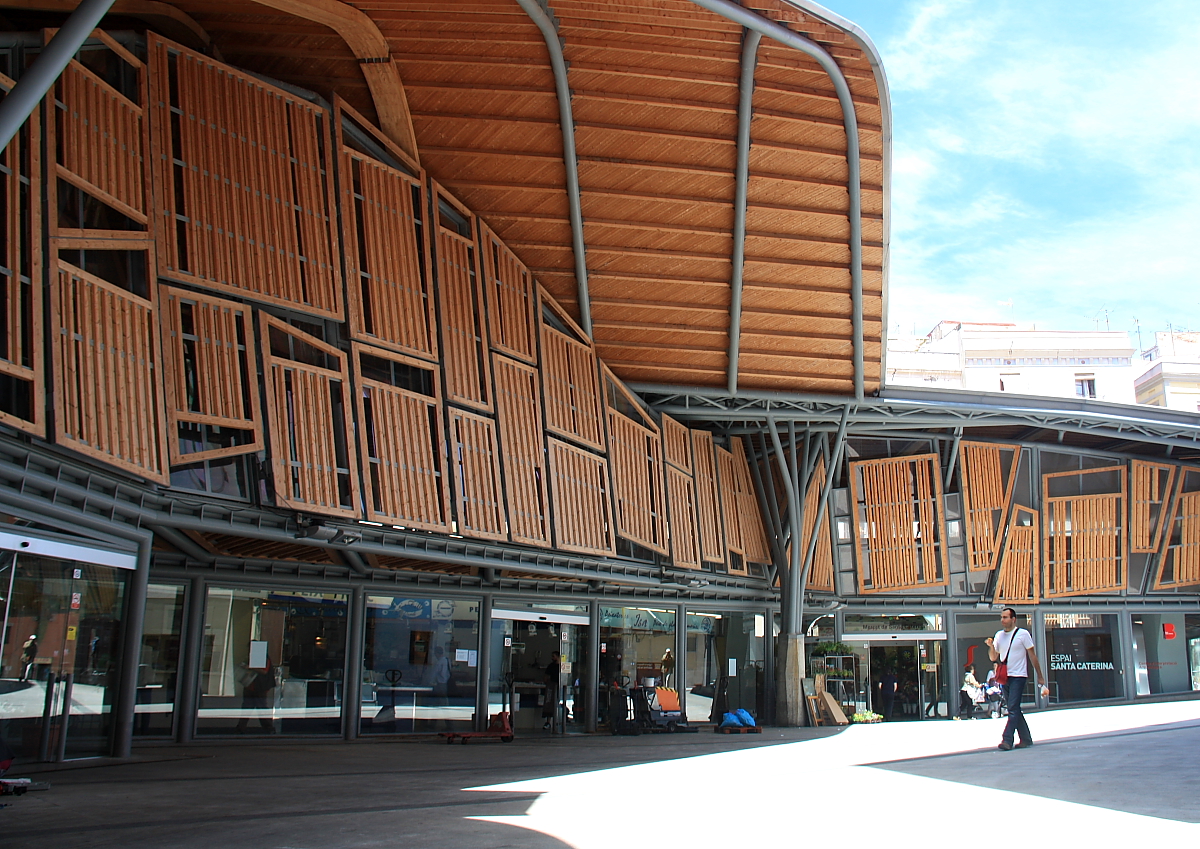 Food market on the site of the former Convent of Santa Caterina (torched by anti-clerical revolutionaries in 1835) which served as a food hub in the post-Civil War period. Traditional market layout on the interior topped by an undulating roof adorned with 325,000 tiles, supported on a laminated wood structure and steel arches. The design and construction brings together traditional and new techniques: the roof form and structure were computer-generated, but the roof panels, due to the great number of awkward curves, required significant manual labor. The Guardian reviewer suggests that the market's spirit recalls "local boat-building techniques and seeming exactly right for its setting between two important medieval churches - the cathedral and the ship-like Santa Maria del Mar."

Spend time here to see some of the best-trained dogs you will see anywhere in the world, patiently waiting as their people purchase poultry and devour tapas. 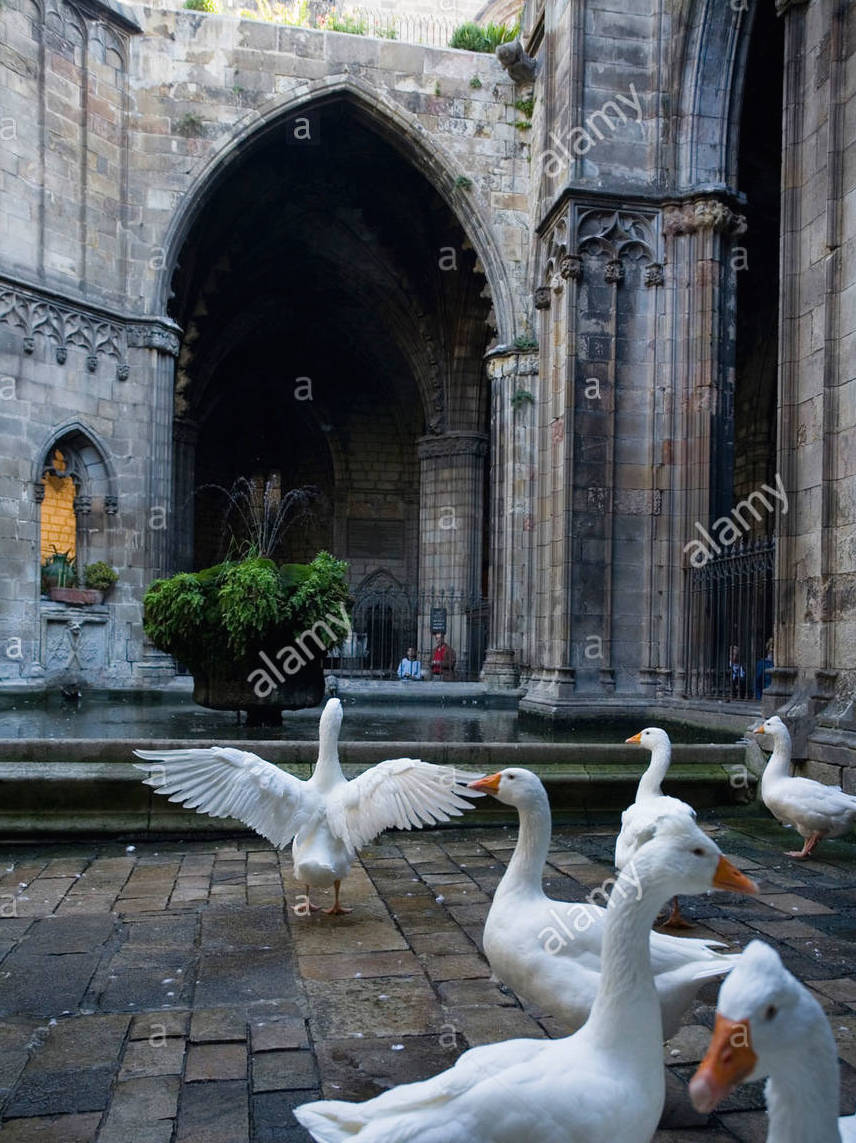 The Cathedral of the Holy Cross and Saint Eulalia. Eulalia is a co-patron saint of the city, martyred by the Romans, and buried in the crypt.

Built on the site of a complex dating back to Early Christian and Visigothic eras (4th-7th c.). New Church began in late 13th c., starting with the east end and reaching the west facade in 1417. The cloister, which encloses the Well of Geese, was built in 1448. (13 geese are kept as a reminder of Eulalia's age when she was martyred.) Facade begun in late 19th c. on inspiration of original drawings and completed in 1913.

Plan includes five tall aisles with a truncated transept that end in a chevet of the same width as the nave.

"St. Mary of the Pine" is one of the titles used for the Virgin Mary. In the Catalan way, the church comprises a single nave with very little ornament, somewhat owing to its burning in 1936 at the hands of anarchists.

Front facade features a rose window, rebuilt in 1940 after the original design. Tympanum below features a Virgin and Child with the arms of the city and parish. The octagonal bell tower reaches a height of almost 180 feet.

Begun as a reform for public health, in order to centralize the scattered hospitals across the city. Four two-story wings around a central patio; expanded with more wings in later centuries. One of the most ambitious hospitals of the Middle Ages anywhere in Europe, treating the physically and mentally ill, as well as serving as an orphanage. (It's also where Gaudí died in 1926.) It served well into the 20th c., replaced in 1929 by the Modernista hospital complex built by Domènech i Montaner in the Eixample. Interiors include great vaulted halls, the Galeria del pati, and gardens with fountains and citrus trees.

Las Ramblas is to Barcelona what Piazza di San Marco is to Venice.  Laid out starting in 1740 along historic edge of the city that was once a muddy bed filled with sewage. Main extant buildings constructed in the nineteenth century and after.

A market has been on this site, very near to the original old city gate, since the early 13th c. Construction on this structure began in 1840 with several rebuilding efforts to follow, concluding with the present metal roof in 1914.