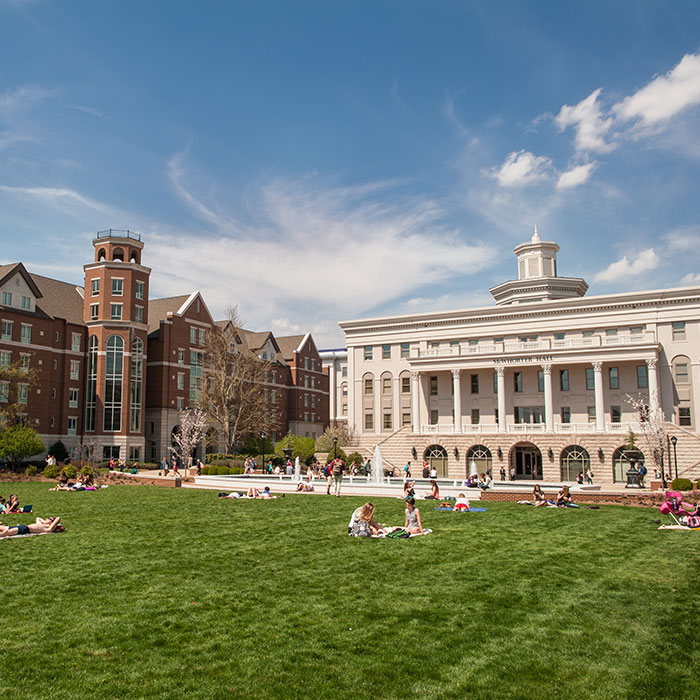 I think you are acquainted with this place

Place-making and Being a Good Neighbor

Neighbor, "one who lives near another," is a word taken from Old English/West Saxon neahgebur, from neah "near" and gebur "dweller" (related to our "dwelling"). Literally, neighbors are our near-dwellers. Not just the folks next-door, they're the people we come into contact with in a great number of settings, both permanent and temporal, formally and informally, for long-time commitments and short acquaintances. By extension, and adopting the human analogy that we so often apply to architectural thought, our buildings stand in near-dwelling groups, and we can design to enhance or prohibit neighborly feelings between them, and among the people who inhabit them. One could argue that really good neighbors, like good hosts, will welcome and make places for everyone, including people who have been historically marginalized due to such factors as race, gender, disability, and socio-economic status.

Just as the context of our own actions, thoughts, and beliefs take on greater power when they are manifest in community, the quality of our buildings also can be seen as most important when it is in context of other surroundings. We've seen the importance of context from several different perspectives; this week we look at the angle of how building designs can contribute to, or detract from, the making of place, and meaning-making within a place. Here in Nashville there is a strong value for neighborhood identity and also a sense of frustration at developments that detract from identity-making. This is a longstanding issue in architectural design, articulated in formal theory at least as early as Alberti. The way that individual designs, urban layouts, traffic planning and the hundreds of other designed strategies that are behind every settlement are neither just aesthetic preferences nor fulfillment of code objectives; they embody human values and decisions that directly affect the people who live in and around our buildings.

In this final week of ARC 1015, we again take a past/present/future study of place-making to see how policy and preferences have shaped our cities and the lives within them, and the way the profession has taken part in these developments. These considerations will draw together many of the themes of the class and ask you to come to terms with these many strands that you are inheriting from the past, and consider what your response will be for the present and future.

To successfully complete the twelfth and final week of the semester in ARC 1015, follow these steps:

(1) Watch this video for an overview of the week

(2) Work through the narrative and activities that follow on this page, noting the following upcoming due dates.

(3) Read the current (and final!) assignment in the Paul Goldberger book, Why Architecture Matters (Chapter 7).

This week you will engage in the third and final tiered discussion of the semester (available on the course Blackboard site). Make sure to find your name below and see when your work is due:

for the discussion board

Our last several weeks of sustainability studies would never have happened if the architecture profession (and the fields it depends on) had not adopted so many unsustainable practices in the last centuries. Our current condition is, to a great extent, shaped by decisions that have led to accumulated environmental, economic, and social challenges. All of these are exacerbated by invisible policies regarding class and race that have had very, very visible impacts on our cities. Some of the most devastating of these are discussed in the short film below:

Because the unfair policies described in Segregated by Design were enacted at the federal level, there are very, very few communities nationwide (especially when you consider the country's largest cities) that escaped from the one-two punch of urban renewal and highway construction (that, even if it was enacted in a value-neutral way, would have led to physical devastation) and the racist policies behind them. This is certainly true of Nashville and the other big cities in Tennessee, whose historic grids--and the largely Africa-American neighborhoods that populated them--were reshaped, disrupted, and dismantled with the construction of highways and institution of redlining policies. 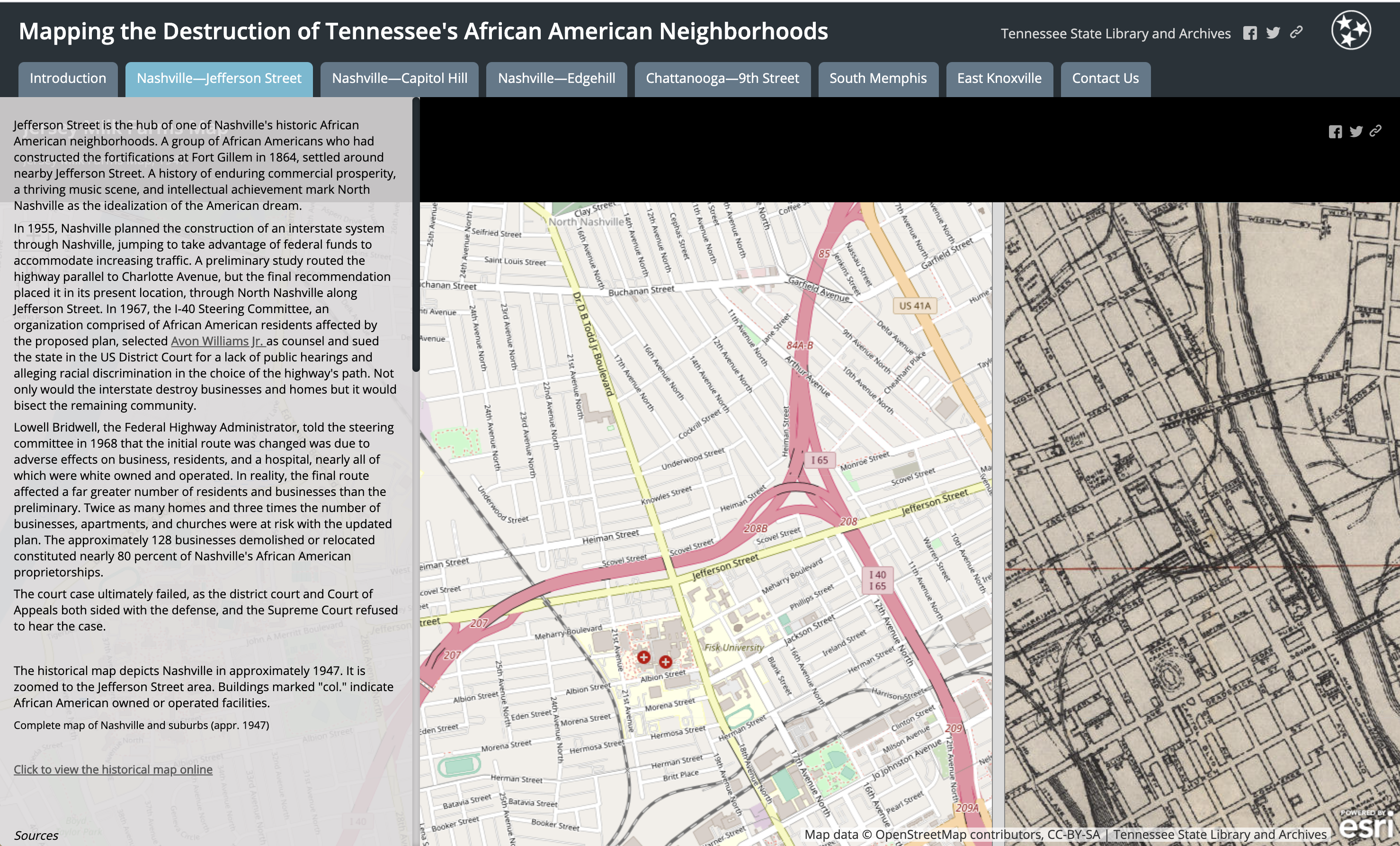 For a very good overview of Nashville's history as a city, read this publication by the Civic Design Center.

Although there were points of resistance to these developments in the architecture community and society at large, they could not stop the policies from (re-)shaping our cities and the communities within them. One of the strongest calls from within the community was voiced at an AIA Convention in Portland held in 1968, just a few months after the assassination of Martin Luther King, Jr.  The keynote was presented by civil rights leader Whitney M. Young, the executive director of the National Urban League, founded in 1910 to improve the standards of living for African Americans and other marginalized groups through increased economic empowerment, equality, and social justice.

Architects can no longer feel comfortable in thinking that the problems of our cities--not all of which architects are responsible for but some of which they could help to ameliorate--are a past matter of history, part of the problems of the 1960s that only the most optimistic people could believe were solved with the Civil Rights Movement. The #BlackLivesMatter movement, which gained so much unwanted attention and energy from the brutal killing of George Floyd, has shone a light on the continued challenges before us.

Architect Bryan C. Lee, design principle at Colloqate Design, a multidisciplinary "Architecture + Design Justice practice focused on expanding community access to, and building power through the design of social, civic, and cultural spaces," has written and spoken widely on these issues. His perspective on the oppression built in to the design of our cities is encapsulated in this (necessarily) shocking statement,

For nearly every injustice in the world, there is an architecture that has been planned and designed to perpetuate it.

The following article points out how the profession of architecture has been complicit in these oppressions and offers a path forward through the Design Justice movement, which comprises policy decisions, professional actions and attitudes, community engagement, and a focus on designing "liberating spaces."

for the discussion board

Beyond equality, which ensures that everyone is offered the same resources, equity is the state of giving all people "what they need to enjoy full, healthy lives.... like equity, equality aims to promote fairness and justice, but it can only work if everyone starts from the same place and needs the same things." Our opportunities to increase equity take several forms; some of them follow below.

An important way that architects can counter bad policies is to get involved with the process by which those policies are adopted: vote, attend city council meetings; run for office. Really! More immediately, work and educational environments, and access to both, require continued attention and reform.

In the realm of design, architects need to find ways to work around or through prevailing and oppressive policies, but can also focus on designing better places and cities at all scales. Policy and design work together to make our cities inclusive.

At a broader scale, the design of cities and streets, as well as approaches to regionalism that favor environmental and culturally sustainable approaches to design, are the focus of many architects working to revitalize historic cores and design new settlements on the basis of old principles. Urban streets are deemed "good" when they promote street life and contribute to a coherent image. Because of this, the world's great cities are known for well-defined streets as much as individual monuments. Consider these famous places:

These are famous streets, well-known for their aesthetic coherence and recognizable design characteristics, and lively street life surrounding the amenities they offer. They also can be seen as important antidote to the sameness that has spread globally, connecting human need for distinctive, authentic places with approaches to sustainable design.  One might question, however, the access they allow or promote. In short: whose streets are these?

Similar questions are oftentimes posed to New Urbanist designers, whose policies aim to be sustainable. To what extent do they achieve the three realms? Watch on for two views:

Ideally, our policies, practices, and design coalesce into environments that promote social equity. Yasmeen Lari, whom you've met before in context of her vernacular-inspired architecture, provides a great summary of the intersection of racial, environmental, and economic concerns in this recent address, and provides a powerful voice to the conclusion of this lesson.

Update from Monday: Dr. Amundson will conduct class from off-campus; for notes about attendance on campus/online, please see her email from Monday (11/9).