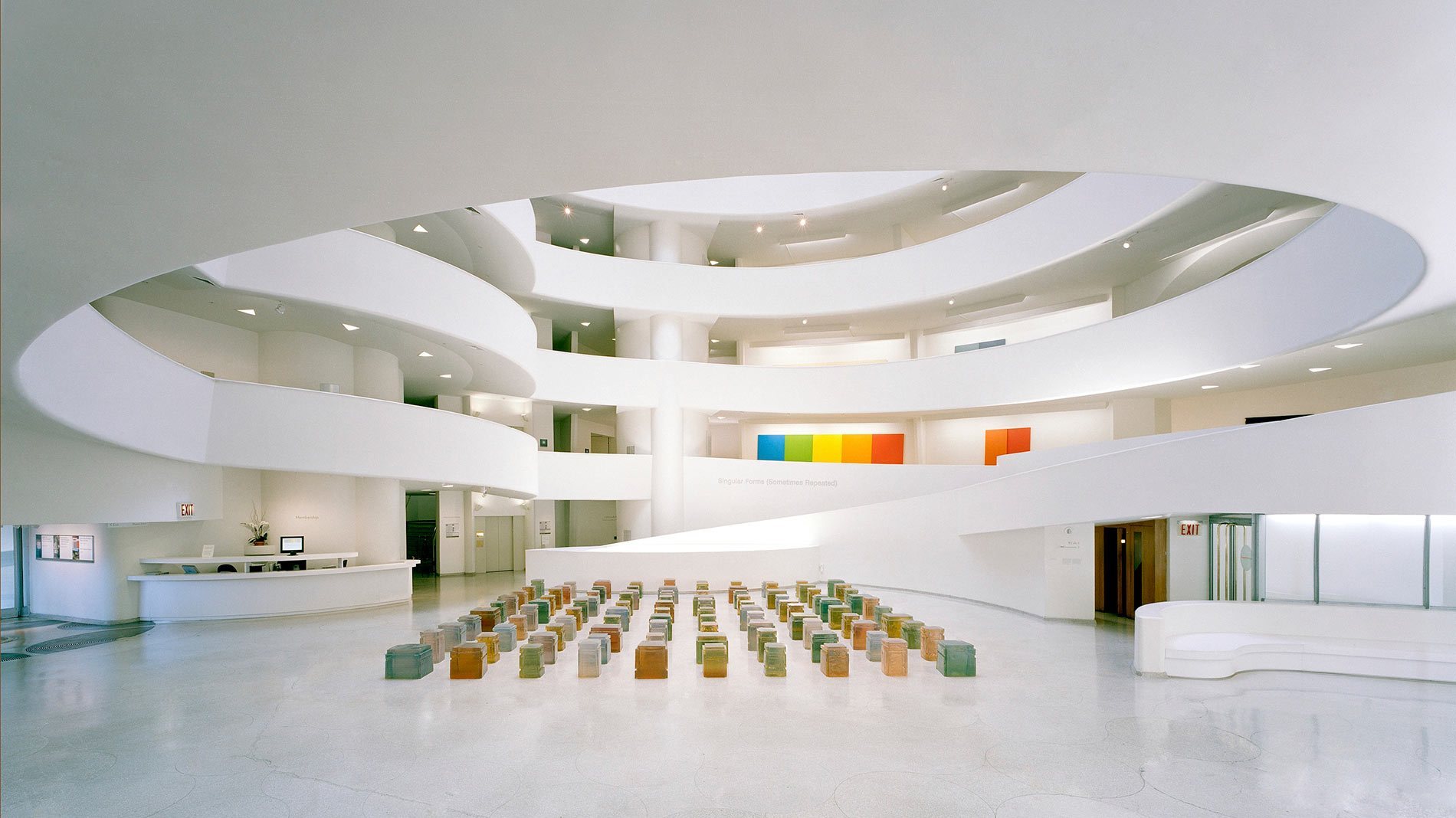 Last week we considered aesthetic judgement from a largely formal point of view (with some association with social significance) and focused on building exteriors: how they are seen from the outside, focusing on the Classical and Modernist traditions. This week we turn our considerations to the interior experience that is considered, by many, to be doubly internal: the interiors of buildings are more likely to stir our emotions than their exteriors. Aligned with this consideration, we'll include more categories of aesthetic discernment into the mix, with the eighteenth-century framework revolution generated by two new theories that position beauty in a whole new way (and make room for a more emotional response as a result), as well as considering the many variations of inspiration drawn from Gothic architecture.

To successfully complete this week ARC 1015, follow these steps:

(1) Read the current assignment in the Paul Goldberger book, Why Architecture Matters (Chapter 4) & use the guide available on the Blackboard site.

(2) Work through the narrative and activities that follow on this page, noting the following upcoming due dates:

(3) Show up on Tuesday, according to the attendance rolls listed at the bottom of this page.

This additional material responds to a topic that came up in the midst of conversation in class last week. It is a good segue to this week's material.

The Eye of the Beholder

The hegemony of beauty as the end-all, be-all aesthetic experience--a position it had held since Classical antiquity--was forever changed in the mid- to late-eighteenth century, when a wider variety of aesthetic options were welcomed into the fold of "good taste." Whereas the Classical and Modernist traditions share a quality of rationalism--the achievements of noteworthy buildings can be codified with an intellectual process based on objective criteria--the shift of the eighteenth century introduces the matter of subjective feeling bound to personal experience. The idea of "taste" as a taken-for-granted, shared intellectual acknowledgement was now a matter of experience; writers started using the phrase "emotions of taste" to explain not just how the thing looked, but how its looks made them feel. Specifically, the idea of beauty as connected to specific proportional systems and drawing form a select group of precedents was now just one "emotion," to which was joined the new experiences occasioned by the picturesque and the sublime. Blossoming in the fertile, imaginative soil of Romanticism (which affected all forms of art, from poetry to painting), the work of two particular writers stands out, and you should read them in their original texts via this VoiceThread, which includes an assignment.

You'll note from these excerpts that the theory of the beautiful, sublime, and picturesque in this context is not style-specific. Although there are some tendencies to connect beauty to Classicism and the Gothic to the Sublime, it's not a one-for-one exchange. While the experience is meant to be a personal one--and thus the common expression, "beauty is in the eye of the beholder" (an idea that would have made Vitruvius and Alberti spew)--the principles laid out by Burke and Price do typify what kinds of forms engender different emotional responses to our interactions with the beautiful, the sublime, and the picturesque.

Last week we looked at two of the major traditions in architecture: Classicism and Modernism. The third major development that should find its way into an introductory course like this is the stuff that came in between those two bookends: the middle ages, the medieval: in its most accomplished form, Gothic. As is the case for ancient Classical (Greek/Roman) architecture that served as precedent for later developments in Classical traditions (e.g. the Renaissance, Neo-Classicism), Gothic architecture--the original buildings, constructed mostly in the 12th-14th centuries in Europe--is the foundation for several later traditions. An important aspect of understanding the tremendous variety in these later traditions is the fact that they are also the result of the eighteenth-century theories that you just read about. In short: if the Renaissance norms of beauty were still in place as the only way to discern the quality of architecture, we'd never have anything that drew from Gothic inspiration because Gothic will never ever be beautiful in Classical terms. However, burke & Price gave us a language to appreciate both the picturesque and sublime qualities that we see in Gothic architecture: the "real," original medieval buildings and the diverse ones that follow, starting in the 18th century.

Gothic Foundations in the Middle Ages

A word on nomenclature: the terms middle ages, medieval, and Gothic were all introduced by later people. Of course there is no "middle ages" unless you're in, say, the nineteenth century and looking for a name for what happened between antiquity and the Renaissance (likewise for medieval, which derives from the modern Latin for medium aevum ["middle age"], and only came into regular use in the twentieth century). "Gothic" has an even sadder derivation, dreamt up in the sixteenth century by Classically-minded folk who disparaged the architecture after the fall of Rome as being so horrid that only Goths (the barbarian invaders from northern Europe, not these Goths) could have built them.

With a greater appreciation for the whole history of architecture, we can recognize the achievement of the many strains of medieval architecture and most of us would also appreciate the accomplishment of the Gothic builders. Let's take a look at where those achievements come from:

While most people (in the US, at least) think of French Gothic when the subject comes up, the Gothic architecture of the late middle ages really shows some amazing diversity from place to place. Watch this slide show (approx. 48 min.), which will take you through a millennium's worth of medieval architecture:

The appreciation for various and varied aesthetic experience made possible by a recognition of the sublime and beautiful allowed Gothic architecture--so long maligned because it could never live up to prevailing Classical ideals of beauty--to at last emerge as an acceptable matter for architectural delight. By the later eighteenth century, the two prevailing streams of aesthetics maintained a vision of Classical beauty as the highest expression for most public architecture, but increasingly medieval aesthetics found its way into the public sphere. Through the nineteenth century and into the twentieth, various medieval idioms became vehicles for new theories of architecture. The diversity among those theories shows up in architecture of striking diversity in the century between 1820-1920 (and beyond, but that will be our case study), yet all drinking fro the same well of inspiration. For example, and especially in England, because of associations between Gothic architecture and the ostensibly "religious" character of the middle ages, Gothic became popular for church design; likewise, its associations with the consolidation of England as a political unit also made it appropriate for civic structures like town halls and, famously, the Palace of Westminster (Parliament) in London. In the US, the medieval buildings of Cambridge and Oxford inspired the choice of style for elite institutions of higher education as well as a new kind of office building that people were starting to call "skyscrapers." Critics and builders looking for a sense of rationality in structural design found it in the vaulted structures of the middle ages, even with new metallic options that, when joined with colored glass, promised a new Utopia.

To round out your study of Gothic inspiration and the things it inspired...

Attend Class (check back for updates to the agenda):

Note: when you come to campus, please bring a table label with your name on it (a regular piece of paper folded longwise will work; you can be more creative, if you like), and a wifi enabled device (ideally laptop or tablet)

Review chapters 3 & 4 in Why Architecture Matters ("Architecture as Object" and "Architecture as Space"). Take some time to think about, reflect on, and journal about the principles you've studied in the book and in class. Then apply what you know to explain an architectural experience.

If you are not currently on campus and cannot come to campus, complete your assignment on one of the following (any of which needs to have the same components of an outdoor and indoor space of some consequence):